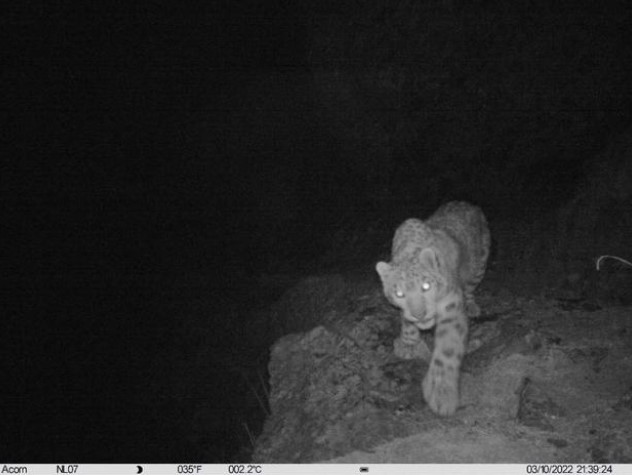 LHASA, April 28 (Xinhua) -- A snow leopard has been spotted by an infrared camera in a mountainous area of Lhasa, the capital of southwest China's Tibet Autonomous Region.

In early March, the infrared camera captured video of an adult leopard behind the Nainang Monastery in Doilungdeqen District, some 50 kilometers from downtown Lhasa, according to the district government on Wednesday.

The footage shows the giant cat grows curious about the camera, sniffing around it and blowing breath on the lens.

Infrared camera surveillance is part of a research project led by Lyu Zhi, a conservation biology professor at Peking University.

Research findings show that the mountainous areas around Lhasa are likely an important potential habitat for snow leopards, which are in need of further and continuous research and protection work, Lyu said.

Snow leopards are under China's highest national-level protection and are listed as vulnerable by the International Union for Conservation of Nature. They can be spotted in alpine areas in China's southwestern, northwestern and northern regions, including Tibet, Sichuan, Xinjiang, Gansu and Inner Mongolia.