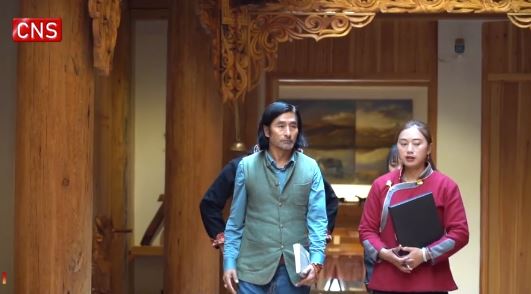 He was also among the first group of international students in Shangri-La.

Zabagedan was born in south India in 1970. When he grew up, he followed his father back to China. At 17, he was enrolled at a local primary school to study Chinese and Tibetan languages.

With the advance of reform and opening up policy, a small number of foreign tourists began to visit Shangri-La in the early 1990s. Zabagedan worked as a part-time tour guide for them.

He has witnessed the rapid development of western China, including the government building roads at remote villages and new houses for local impoverished Tibetans.

He opened a Tibetan hotel in the ancient city of Dukezong in Shangri-La, whose name means "Come here, friends" in Tibetan.

He has also run many homestay hotels in Shangri-La, Lijiang, Lhasa, and other places.

With the development of Shangri-La tourism, Tibetan culture has been better inherited.

The homestay owner is committed to the protection and development of traditional Tibetan culture.