LHASA, May 16 (Xinhua) -- A rare golden cat has been spotted in the city of Nagqu, southwest China's Tibet Autonomous Region, the local forestry and grassland authority said. 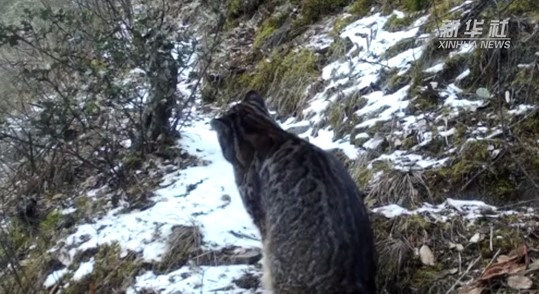 An Asian golden cat was captured by infrared cameras during a biodiversity survey project, which was jointly carried out by Nagqu's forestry and grassland bureau and the Shan Shui Conservation Center.

It is the first time an image of the animal has been captured in the area.

The Asian golden cat is a national first-class protected animal and classified as "near threatened" by the International Union for Conservation of Nature (IUCN) on its Red List of Threatened Species.

A monitoring network with 197 infrared cameras was established under the project, covering 11 counties and districts of Nagqu.

"The appearance of the rare species is a testament to the improvement of the environment in the city," said Mao Shiping, deputy director of the city's forestry and grassland bureau, adding that they will further strengthen the monitoring network and carry out long-term systematic research work.