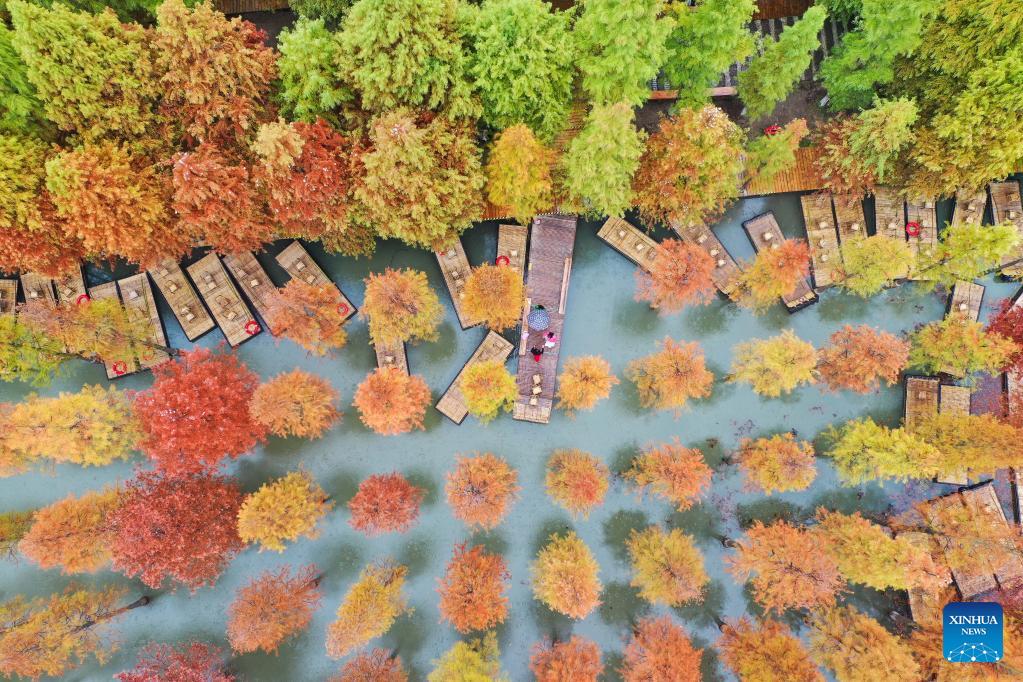 China's efforts in wetlands protection were hailed by the participants of the ongoing 14th Meeting of the Conference of the Contracting Parties to the Ramsar Convention on Wetlands, and participants in the meeting expressed their confidence in wetlands protection and international cooperation upon hearing the speech delivered by President Xi Jinping at the opening ceremony in Wuhan, Hubei province.

At the opening of the meeting, known as COP14, on Saturday, Xi said via video that it is important to build global consensus on prizing wetlands, show respect for nature, minimize disruption and damage to them caused by human activity, and protect their ecological security in order to leave the beautiful wetlands to future generations.

"It is important that we advance the global process on wetlands conservation, redouble our efforts to preserve their authenticity and integrity, include more important wetlands in nature reserves, improve cooperation mechanisms and platforms, and increase wetlands coverage of international importance," Xi said.

He also called for enhancing people's well-being globally by leveraging the role of wetlands in promoting sustainable development, tackling climate change, protecting biodiversity and delivering more benefits to people around the world.

He said that as the host country of the 13th meeting of the conference, the UAE also made great efforts toward wetlands protection, adding that he looks forward to more cooperation with China and other countries.

COP14, which has the theme "Wetlands Action for People and Nature", is scheduled to run from Saturday to Nov 13 in Wuhan and Geneva, Switzerland.

China has made historic achievements in wetlands conservation.

It has increased its wetlands area to 56.35 million hectares, put in place a protection system and enacted the Wetlands Conservation Law.

"China has recently drawn up a layout plan of national parks. Under the plan, China will designate a number of national parks, accounting for about 10 percent of the country's land area," Xi said.

In 1992, China joined the Ramsar Convention, signed in 1971 in Ramsar, Iran, for the protection of wetlands and their resources.

Shen Yueyue, vice-chairwoman of the Standing Committee of the National People's Congress, said at the ceremony that China has maintained a responsible attitude toward the world by earnestly fulfilling its responsibilities in the convention.

China carried out extensive wetlands cooperation with the convention's parties and conducted training for wetlands managers from 42 developing countries. The Small and Micro Wetland Protection Initiative, proposed by China, has provided a reference for the world's rural ecological protection and governance, she said, adding that the NPC, China's highest legislative body, and its Standing Committee will strengthen supervision and inspection of the implementation of the Wetland Protection Law and accelerate the legislative process of the National Park Law.

For better protection of wetlands, Xi said that a national wetlands conservation plan and major conservation projects will be implemented.

He also said that China will promote international exchanges and cooperation to protect the four bird migration routes that pass through China and to build an international mangrove center in Shenzhen, Guangdong province, adding that China supports the convening of a conference of the World Coastal Forum.

The province has completed the preparatory work and will engage in the project soon.

"It will set an example of wetlands protection for other estuarine wetland ecosystems in the country," he said.

On Sunday, the COP14 high-level ministerial segment concluded in Wuhan and adopted the Wuhan Declaration, which is committed to develop a more ambitious strategic plan and take more effective action about wetlands by 2030.

By LI HONGYANG in Wuhan

Xinhua contributed to this story.