According to the National Forestry and Grassland Administration, China has provided training to 42 developing countries, contributing to global ecosystem governance.

GENEVA, Nov. 8 (Xinhua) -- China's achievements in wetlands conservation and its contributions to international cooperation in the field have been widely recognized by participants at the ongoing global conference for wetlands.

Themed "Wetlands Action for People and Nature," the 14th Meeting of the Conference of the Contracting Parties to the Ramsar Convention on Wetlands (COP14) is in session from Nov. 5 to 13 in China's Wuhan and Switzerland's Geneva.

As host country of the conference, China, at the exhibition, presented pictures and videos focusing on wetlands and urban life. China's exhibition showcased wetlands conservation at national, provincial and municipal levels, attracting many to learn more.

A black-billed gull flies over a breeding area in a wetland in Liaohe River delta in Panjin, northeast China's Liaoning Province, May 5, 2022. (Xinhua/Yang Qing)

"Do you have digital versions of those brochures? I would like to take them all!" At the booth of Wuhan, Pipat Ruangngam, an expert of the water resources department of Thailand, showed great interest in wetlands conservation along the Yangtze River.

"China can manage this very long river with biodiversity and cultures," Ruangngam said, "In terms of the wise use of wetlands, China has made a good example for us, so we have to learn more about China's wetlands management."

Vincent Cohen Barugahare, an official with Uganda's Ministry of Water and Environment recalled a visit to northwest China's Qinghai Province, where he learned a Chinese practice for conservation, the ecological migration -- relocating people from ecologically fragile areas with little living conditions to other areas and providing them with social and economic support.

"We implemented it in Uganda. We used it for restoration. We talked to people, moving them from wetlands and giving them alternatives outside," said Barugahare, who said it was a successful case for better conservation through cooperation. 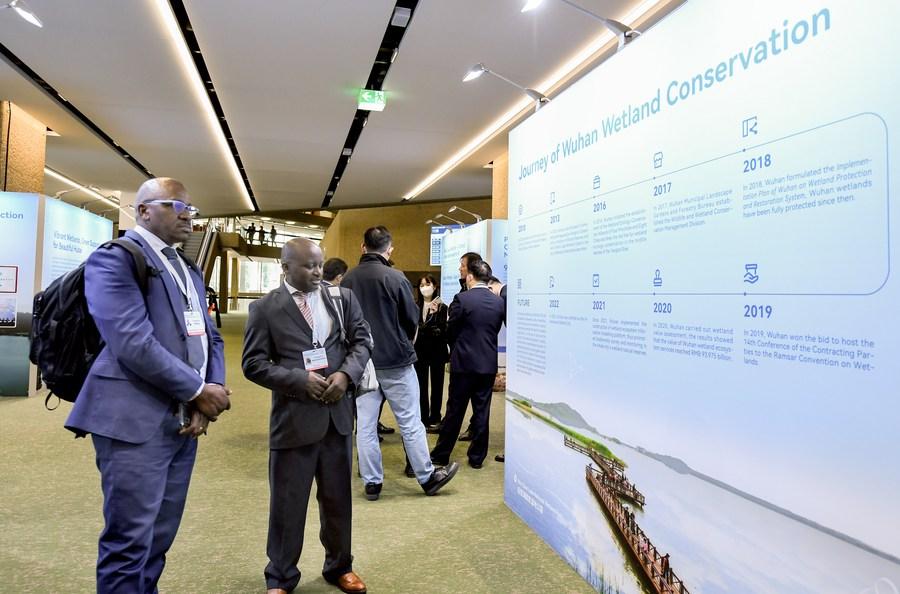 Participants view the exhibition on China's progress in wetland protection and restoration at the 14th Meeting of the Conference of the Contracting Parties to the Ramsar Convention on Wetlands (COP14) in Geneva, Switzerland, Nov. 5, 2022. (Xinhua/Lian Yi)

According to the National Forestry and Grassland Administration, China has provided training to 42 developing countries, contributing to global ecosystem governance.

Seung Oh Suh, executive director of the Ramsar Regional Center East Asia, which works with more than a dozen Asian countries to implement the Ramsar Convention, told Xinhua that he saw clear development of China's wetlands conservation in recent years, when the number of and sizes of wetlands increased greatly.

He hailed the development that urban residents in China have easier access to wetlands, that the role of wetlands in urban functions and residents' lives has expanded, and that people have become more aware of the importance of wetlands protection.

"We support China's attempts to put together a proposal for a mangrove conservation center," said Rostron, adding that it would help reduce carbon emissions. 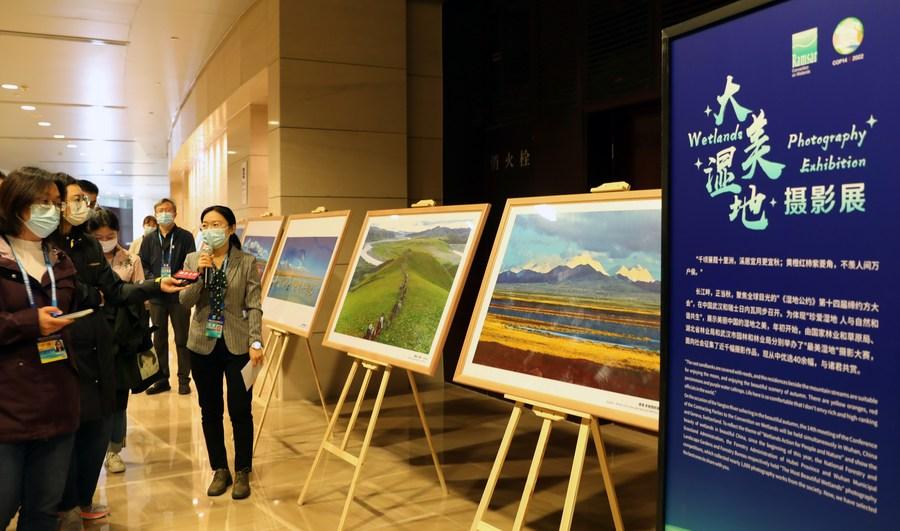 Gillian Davies, a visiting scholar at the Global Development & Environment Institute of Tufts University, visited some wetlands and restoration areas in east China's Changshu city in the Yangtze River Delta in 2016.

"It was really rewarding to see the progress that China is making in the conservation and restoration of wetlands, which improves the water quality and health. The people in the surrounding areas benefited and it helps provide protection against climate change and the environment," said Davies.

"I would also like to congratulate China on passing a wetlands conservation law in 2021 and bringing that law into full force. This is a major achievement," Davies added.