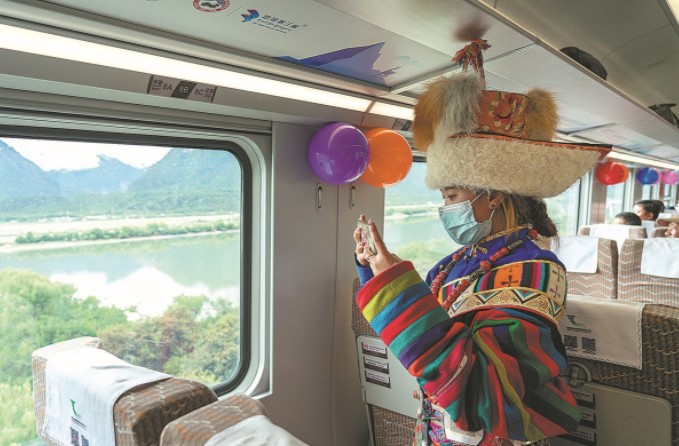 Dekyi Tsering, a herder from the Tibet autonomous region's Amdo county, records the scenery outside the window of a train on the Lhasa-Nyingchi Railway on Saturday. [Photo/CHINA NEWS SERVICE]

Since it began operations a year ago, Tibet's first electrified railway has facilitated about 1.14 million passenger trips and has hauled 47,800 metric tons of cargo. The railway celebrated its anniversary on Saturday, marking a year of service that has benefited residents and tourists and has boosted local socioeconomic development.

The 435-kilometer railway linking Lhasa, capital of the Tibet autonomous region, and Nyingchi began operations on June 25 last year. It connects to the Lhasa-Shigatse railway and has reduced travel time between major cities in the region, such as Lhokha and Shigatse.

It is the first railway in southeast Tibet, and also the first line in the region to feature a Fuxing bullet train.

The railway has improved service quality in passenger and freight transport over the year, according to China State Railway Group, the national railway operator.

The line has handled a peak of 4,300 passenger trips daily, bringing convenience to tourists and local residents.

Thanks to the railway, local specialties and agricultural produce such as Tibetan chicken and Nyingchi matsutake－an edible mushroom grown in the wild－have been transported to other parts of the country. In turn, supplies such as food, grain, fertilizer and construction materials have been sent to southeastern Tibet from other parts of China, boosting regional economic development and fulfilling local residents' needs.

Tibet-"the roof of the world"-is known for its rich biodiversity and breathtaking scenic sites, but also its poor transportation infrastructure.

The natural and topographical conditions have posed a challenge to infrastructure development for decades. A bullet train service was beyond residents' wildest imaginations.

"I never dreamed that traveling on a bullet train would be so comfortable," said Bo Anyuk, a 74-year-old Tibetan resident of Pai township, Manling county of Nyingchi.

"I worked as a truck driver decades ago, and at that time, there was no proper road between Lhasa and Nyingchi. It would take me 15 hours to drive a truck between the two cities," he said.

"Now, it takes only three hours by train or less than five hours by car. It's incredible."

Bo Anyuk has traveled by train several times between Lhasa and Lhokha to seek medical treatment for an eye ailment.

"It's really convenient. I do not feel tired on the train," he said.

The line has also boosted local tourism, though the industry has still been affected by the nation's COVID-19 epidemic.

The line will link with the Sichuan-Tibet railway when the latter begins operation and become an important railway corridor connecting Tibet with other parts of China.