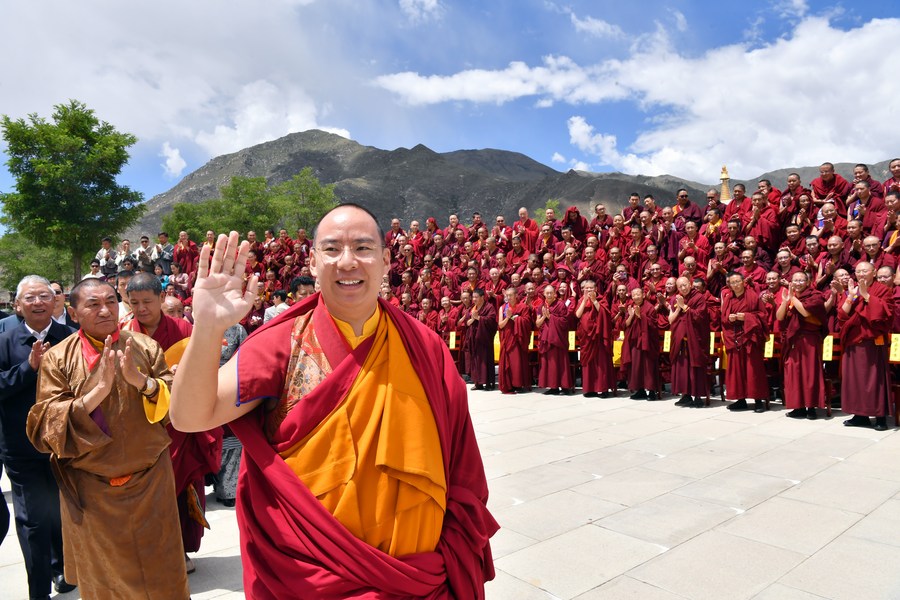 In the main hall that houses Buddha statues of the main sects of Tibetan Buddhism, Panchen Rinpoche chanted prayers with the monks, gave lectures, and distributed alms to all the students.

After lecturing for more than one hour, Panchen Rinpoche had a discussion with student representatives.

On Friday morning, Panchen Rinpoche performed head-touching rituals for all the monks and nuns at the academy.

It was Panchen Rinpoche's fourth visit to the academy to give lectures and have exchanges with students.

The Tibet Buddhism Academy was established in October 2011. So far, China has invested nearly 400 million yuan (about 59.8 million U.S. dollars) in the building of the largest Buddhist academy in Tibet, and it has trained thousands of outstanding monks and nuns for the Tibetan Buddhist community.

Gaesang Wangdue, vice president of the academy, said currently there are 906 students from 469 temples across Tibet, including more than 800 monks, 132 nuns, and 14 young Living Buddhas.

Panchen Erdeni is one of the most influential Living Buddhas in Tibetan Buddhism. Panchen Erdeni Chos-kyi rGyal-po was born on Feb. 13, 1990 in Lhari County of Nagqu in Tibet Autonomous Region. On Nov. 29, 1995, he was approved and confirmed by the State Council as the reincarnation of the 10th Panchen after lot-drawing from a golden urn. He was then enthroned as the 11th Panchen Erdeni.