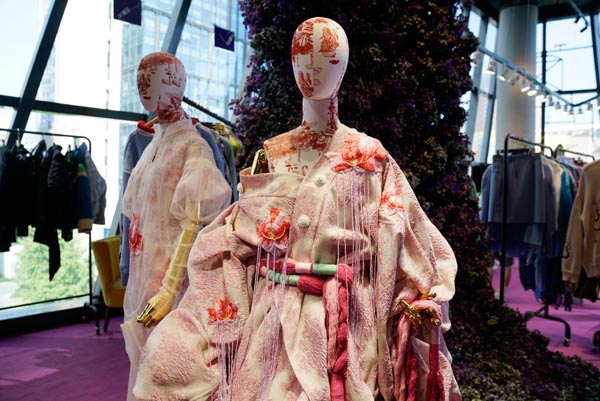 An exhibition in Shanghai displays a new collection featuring Tibetan elements and handicrafts related to Tibetan embroidery. [PHOTO BY HE QI/CHINA DAILY]

The spring/summer 2021 collection focuses on Guinan county and uses fashion to deduce the theme of how the traditional becomes the contemporary.

The new collection is inspired by jialong－traditional hair-braid decorations worn by ethnic Tibetan women－and combined with the officially listed Qinghai's provincial-level intangible cultural heritage of Tibetan embroidery. This is presented in such details and totems as flowers and fruits with blessings written in Tibetan.

"This is the second time that we've chosen intangible cultural heritage as a theme for a collection since the autumn/winter 2018 collection featured embroidery from the Xinjiang Uygur autonomous region," MUKZIN designer Han Wen says.

"This time, we hope to give Tibetan embroidery a more modern expression so it can be better integrated into contemporary clothing."

"We know that Europe and the United States have characters like Superman, and Japan also has its style of comic-book characters. In fact, China also has many local characters," Feng says.

"So, we combine them and graffiti patterns with advanced fashion."

But it's still not easy to integrate a brand with traditional culture.

"I think the difficulty lies in the fact that we don't have much to learn from because we've always been an explorer in combining national culture, including Chinese handicrafts, with fashion," Feng says.

"As an explorer, we still need to spend a lot of time and energy to do original designs. And we find that it's very difficult to collect comprehensive intangible cultural-heritage data because it's not systematic. So, we have to methodically sort traditional culture before outputting the concept that we want to combine with the current design.

"Moreover, there's a conflict between current fashion sense and traditional elements. We've been seeking to balance this."

Apart from the fashion show, MUKIZIN co-hosted a weeklong exhibition with LIHESpace from Oct 11 to 16. It not only displayed the collection but also handicrafts and techniques related to Tibetan embroidery to use contemporary language to communicate and interact across traditional culture and modern audiences.

"The exhibition can express the aesthetic in different ways. We hope it can help audiences think and understand more deeply."