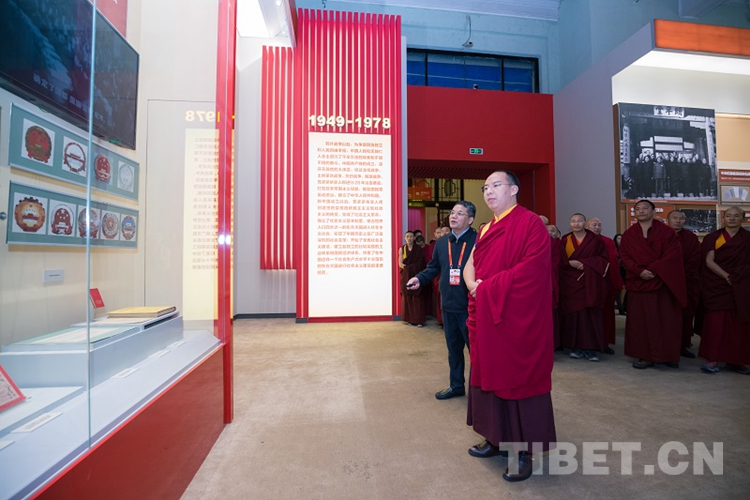 On November 4, the Panchen Erdeni Choskyi Gyalpo, who is a member of the Standing Committee of the Chinese People's Political Consultative Conference (CPPCC) and a vice-president of the Buddhist Association of China, visited an exhibition of achievements in commemoration of the 70th anniversary of the founding of the People's Republic of China (PRC) at the Beijing Exhibition Hall.

The exhibition showcases images that record historical moments of the PRC's grand founding ceremony, a photo wall of the selection of the "Ten Great Buildings of New China" in 1958, a scene that alludes to how the fate of several generations has been changed since the college entrance examination was resumed in 1977, and a film exhibit of the first Spring Festival Gala in 1983. The exhibition gallery is like a tunnel of the eras with photo display boards, models, and video materials.

The 11th Panchen Lama stopped from time to time to take a look, listen carefully to the explanations, and ask questions about the exhibits.

In December 1954, the Kham-Tibet and Qinghai-Tibet Highways, which linked together the "Roof of the World", were opened to traffic, which ended a history of no public highways in Tibet. 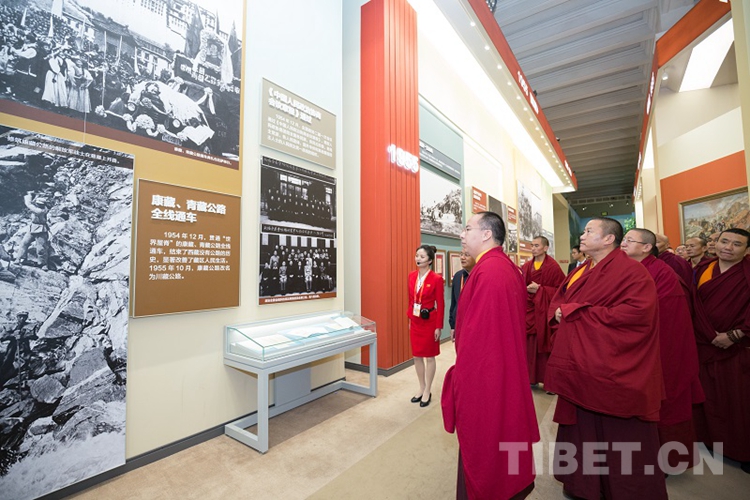 When the 11th Panchen Lama saw photos of road construction workers carrying materials over their shoulders and the arduous task of building the roads, he said emotionally to the people around him: "It was not easy to build a road back then. There was no modern machinery, and they had to rely on manpower. The construction workers overcame many difficulties and suffered a lot!"

In the exhibition area dedicated to national unity, the 11th Panchen Lama was attracted by a huge character spelling "Country" composed of photographs of the 56 ethnic groups in China. He listened carefully to its introduction by the exhibition staff. Among the 56 ethnic groups, in addition to Han and Tibetan, the 11th Panchen Lama recognized the Menba and Lhoba ethnic groups at the first sight, which also reside in Tibet, and he informed everyone of this and other relevant information.

When he watched the video of the first Spring Festival Gala in 1983, the 11th Panchen Lama said with great enthusiasm: "The times have progressed, the development of media has merged together, and everyone's expectations of the Spring Festival Gala are getting higher and higher. When we were young, there were only a few programs. We looked forward to the Spring Festival Gala even if we couldn't watch it. This reflects the increasingly rich spiritual and cultural life of our country."

The 11th Panchen Lama lingered for a long time at the exhibition areas for Saihanba National Forest Park, which has received the "Champions of the Earth Award" from the United Nations Environment Programme, and for ecological construction achievements under the guideline of General Secretary Xi Jinping's saying of "lucid waters and lush mountains are invaluable assets". The 11th Panchen Lama nodded frequently as he listened to the introduction of the ecological environment and environmentally-friendly development.

After the visit, the 11th Panchen Lama took a group photo with personnel from the exhibition.