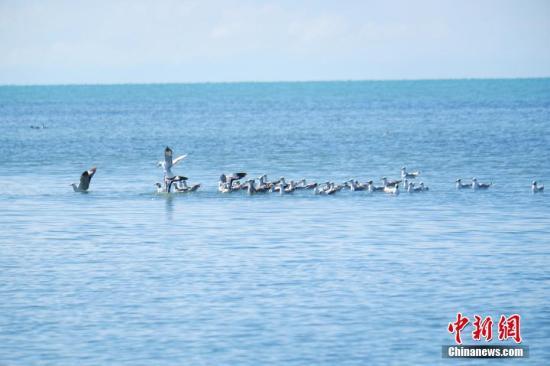 On August 18, black-headed gulls, which inhabit in Qinghai Lake, play on the north shore of the Lake in the Fairy Bay Wetland in Gangcha County, Haibei Tibetan Autonomous Prefecture, Qinghai Province.[Photo/China News Service]

Qinghai Lake is located at the intersection of two international water bird migration routes, the East Asia-Australia route and Central Asia-India route. It is an important stopover for the world's migratory birds, and more than 200,000 waterfowl migrate to Qinghai Lake each year.

At around 19:00 on September 8, a group of 28 small size stints were found in the Bird Island area of Qinghai Lake, including 21 Temminck's stints and 7 little stints.

It is understood that little stints breed in the northern part of Eurasia and Siberia, then fly east to the Chukchi Peninsula, and winter in Africa, the Persian Gulf, the Red Sea, the Caspian Sea, and southern Asia. There had previously been no record of these birds in the Qinghai Lake area.

"In recent years, the lake area of Qinghai Lake has expanded and increased, and the shallow water wetland area on the lakeshore continues to increase, which provides an ideal habitat for wading bird, plover, and sandpiper species," a staff member said. The number of bird species in the Qinghai Lake area has increased significantly, and the biodiversity and richness of species have also increased significantly.

According to the latest monitoring data from remote satellite sensing by the Qinghai Province Research Institute of Meteorological Sciences, Qinghai Lake is currently 4,548.56 square kilometers in area, the largest it has been in 18 years. This is very beneficial for improving the habitat of the wildlife and birds and for the overall ecological environment of the whole lake.

"While the original waterfowl species at Qinghai Lake include wild geese, ducks, and gulls, habitats show that the number of wading birds, plovers, and sandpipers is increasing." According to statistics from the Administration Bureau of the Qinghai Lake National Nature Reserve, the number of bird species in this area has increased from 189 species in the late 1990s to 225 species today. 36 new bird species have been added. The new recording of the little stint bird joins the addition of the purple heron, which was recorded in May of this year.