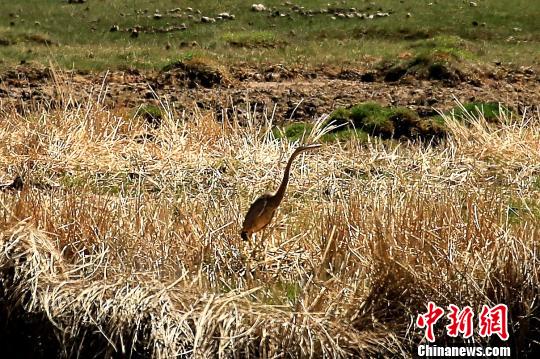 According to the Bureau of Management at the Qinghai Lake National Nature Reserve, observers recently found a type of heron in a small wetland in the area.

After repeated verifications with The Handbook of Outdoor Birds of China, and The Wild Birds Pictorial Guide of China, the bird was confirmed to be the purple heron, which was a new bird species for Qinghai Lake.

As of present, there were 224 types of birds seen at Qinghai Lake.

He Yubang, Chief of the Bureau of Management of Qinghai Lake National Nature Reserve, explained that the purple heron is in the heron family, Ardeidae. According to the Bird Classification and Distribution Index of China, the purple heron is seen in provinces across China except Qinghai, Xinjiang, and Tibet. Since Qinghai Province has no distribution or records of this species, this sighting is a new record for such birds for Qinghai Lake as well as Qinghai Province.

He Yubang said the overall ecology at Qinghai Lake has continued to improve, with numerous new bird species seen, as well as marked improvement in both biodiversity and species diversity.

In the combined observation data for biodiversity from the Bureau of Management at the Qinghai Lake National Nature Reserve, there were 26 thousand water birds among 20 species recorded at the reserve, and 2,793 Przewalski's gazelles were observed along 17 transect lines at 14 habitats.