Police who patrol to protect the environment of Hoh Xil on the isolated Qinghai-Tibet Plateau encounter hardships and rewards. Liu Xiangrui reports.

They were elevated - in every sense. Zhan Jianglong and colleagues stayed up late to celebrate at an altitude approaching 4,600 meters. The policemen were delighted that Hoh Xil, where Zhan has spent two decades as an environmental-protection officer, was listed as a UNESCO World Heritage Site on July 8.

Zhan and his peers live and work in the Wudaoliang Protection Station, operated by the Hoh Xil Nature Reserve Administration, which manages 45,000 square kilometers of isolated grassland on the Qinghai-Tibet Plateau.

Zhan was among the first to join the administration after he retired from the army in 1997. It was then a relatively low-ranking department, but the work required a high level of devotion - in every way. 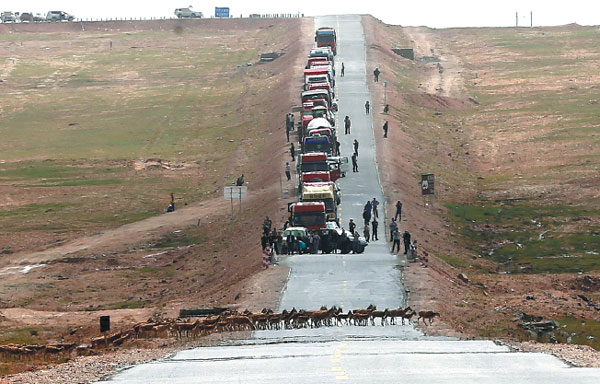 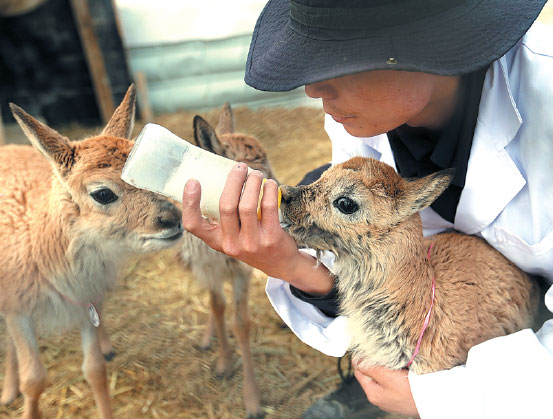 Fawns are fed milk at the Sonam Dargye Station in Hoh Xil.

"I've come to better understand the area over the years," the 43-year-old says.

The native of Sichuan province's Mianyang says he'd only heard about Hoh Xil on TV before he arrived.

He recalls being stunned by the snowcapped peaks and wildlife.

He also recalls the hardship.

All 12 of his colleagues found the living conditions and harsh natural environment difficult. They lived in tents and abandoned military barracks. Many quit during those years, Zhan recalls.

He considered it. A job in the city would have been easier.

But his persistence developed into a profound relationship with the wild animals in the area.

They didn't have access to phones in the early days. His only contact with his family was through letters.

Zhan would ask drivers passing through to post them as a favor. He'd write several identical copies in hopes at least one would reach his loved ones.

His responsibilities have remained essentially the same over the decades.

He and his colleagues patrol the vast prairies. They inspect vehicles on the roads and suspicious off-road tracks to determine if they belong to the vehicles of poachers or illegal miners. The workload was heavier in the early years, he says. His first patrol lasted 45 days.

"It was one patrol after another," he recalls.

"I didn't have more than three days to rest in a month."

Tens of thousands of Tibetan antelope gather around Zhuonai Lake to give birth every year.

The season is among the busiest for officers like Zhan, who camp in tents while observing and protecting the creatures.

"It's overwhelming when we open the tent in the morning and are surrounded by countless antelope," he says.

There was no electricity in the early years. Officers used gas lamps at night and killed time by playing cards.

Zhan, who is now head of his team, patrols for several days once a month. Five or more officers drive two or three vehicles together. They bring such necessary supplies as dry food, gasoline, tents and satellite phones.

"The satellite phones are our lifeline," he says.

"They're our only link to the outside world. There's no mobile signal in the wilderness."

He recalls a dramatic incident in 2003, when his team discovered suspicious tire tracks near a lake while undertaking a joint patrol with officers from another station.

Zhan and a couple of colleagues were approaching the vehicles responsible when they realized the others had fallen behind because of car problems.

"The poachers' cars were right in front of us," he recalls.

So, he and his fellow officers sprang into action and arrested the poachers. The criminals had guns in the front seats but were taken off guard and didn't resist, he says.

The seven poachers were sentenced to 16 years in prison. 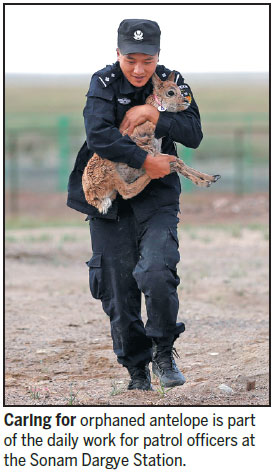 "I was angry and sad to see the dead antelope on the ground, especially the fawns," he recalls.

Government crackdowns on poaching, and such international efforts as sanctions on Tibetan antelope products, brought illegal hunting of the species to a virtual halt in 2008, he says.

While criminals pose a threat not only to animals but also to law enforcement, most of the challenges Zhan and his fellow police face are natural.

It was once common to become trapped in uninhabited areas, he recalls.

Unpredictable weather and tough terrain are primary features of this part of the plateau. Patrols usually include more than one vehicle. That solves many problems. But not all.

He recalls how a senior officer suddenly developed acute pulmonary edema in the early 2000s. He was barely conscious.

"We had to drive nonstop for a full night and the next day to get him out of the uninhabited area."

"Emergencies are very dangerous in the wild," Zhan says. "We have no one to depend on but ourselves."

Sometimes, they were trapped in the wilderness for weeks.

They had to use radios to contact their offices before they had satellite phones.

While they may be far from other humans, these police spend much time in the company of the animals they protect.

Orphaned creatures like antelope are cared for at the Sonam Dargye Station, which is about 60 kilometers from Wudaoliang.

Workers who patrol around Zhuonai Lake during the antelope birthing season bring orphaned fawns to the center, where they are cared for until they're old enough to return to the wild.

Workers like Lhundrub Gyetse bottle-feed them warm milk until they're mature enough to eat grass in a fenced pasture.

"We gradually reduce their contact with people so they can eventually return to nature," he says.

The 28-year-old native of the Yushu Tibetan autonomous prefecture took the job at age 16, after he graduated from middle school.

His responsibilities included serving as a "crossing guard" for antelope passing over major roads during their migrations before he was transferred from Wudaoliang.

Lhundrub Gyetse and his colleagues would stop traffic a couple of times a day to allow the timid creatures to pass. Officers also counted them.

"We learned with experience," he says.

"We'd only stop traffic when the leading antelope was nearly ready to cross. That way, we didn't waste too much of the drivers' time."

Some drivers today volunteer to help them set up barriers, he says.

The Sonam Dargye Station is Hoh Xil's largest. It features a public exhibition room with photos and information about the area and wildlife.

"People used to ask me where they could see antelope," Lhundrub Gyetse says.

"Now, they often see them on the road. We hope more people learn about Hoh Xil. Some are surprised that many people like us and volunteers stay here year-round to protect them."

Winter temperatures can drop below -30 C, so the stations must be heated with coal fires.

Electricity comes from solar panels, and power outages are common.

Water must be transported from a station at the lowest altitude.

Zhan says that while life at the stations has improved, especially since 2000, it's still hard.

Zhan is grateful the government has enhanced efforts to protect the region. He says he hopes such advanced technologies as satellite-remote sensing can assist their work in the future.

"We feel pressure," he says.

"We're responsible. And we need to learn more to do what needs to be done."