Patrolmen in Tibet's Tsongyi county watch over the area's more than 100,000 animals.

Wildlife patrolman Janyor and his colleagues have three indispensable pieces of equipment that they are never without while working on the Tibetan plateau - a telescope, a thick winter coat and a motorbike.

Janyor is a nomad who lives in the Tibet autonomous region's highest county, Tsongyi, which has an average attitude of 5,000 meters above sea level.

Covering about 120,000 sq km, the county accounts for one-twelfth of Tibet's total land area and is located 800 km northwest of the regional capital Lhasa.

It contains the world's third largest glacier, called Purog Kangri, and is also the region's least populous county. This makes it a haven for many rare species, such as the Tibetan antelope, wild yak, Tibetan brown bear, argali, Tibetan wild ass, Mongolian gazelle and black-necked crane.

Statistics from the local forestry bureau show that there are more than 100,000 animals roaming free in the area, under the State's protection.

Janyor comes from the county's Yarchu township and started protecting the area's wildlife in 2008. He and 10 other patrolmen traverse the vast grassland four to five times every month.

"Sometimes two or three of us go on patrol together, but most of the time, I go by myself," said the 46-year-old.

The work involves monitoring living conditions for the wildlife, keeping count of their numbers, and recording any injuries or deaths.

Every month, Janyor rides between 160 and 400 km on his motorbike, even venturing out in the winter, when the area is prone to heavy snowfalls.

Sometimes, he has to live out in the wild for days, bringing with him dried meat and roasted barley flour for food. If he is lucky, he can spend a night in a nomad's tent, but sometimes he has to sleep under the stars.

In return for his work, Janyor receives a yearly stipend from the local government - which last year was increased by 50 percent to 7,200 yuan ($1,060), from the 4,800 yuan he got previously.

"I have learned from my experiences on the job that the number of wild species are increasing," he said.

"But there are also frequent animal attacks on nomads."

Tibetan brown bears and wild yaks are the main culprits, according to Janyor, with the bears, in particular, prone to invading nomads' camps and damaging their belongings.

"I heard of a conflict between animals and a nomad eight years ago," he said. "Since I took the job, I have found that the conflicts are happening more often."

Wildlife protection laws make it illegal to kill much of the county's fauna, even if the animals are trespassing or you come under attack.

"We report the cases of animals attacking people and livestock to the township government, and the victims get accident compensation," said Janyor, adding that he enjoys his work.

"I am pleased to see no one killing or harming animals on the grassland and I get paid to do it."

According to the Tsonyi County Forestry Bureau, there are 74 patrolmen in the county's 31 administrative villages.

Tsering Dorjee, from the bureau, described Tibetan brown bear attacks as a serious problem, but said compensation is paid to anyone who suffers a loss.

Despite these problems, the patrolmen's work is having an effect.

According to Tsering Dorjee, brown bear and Tibetan antelope numbers are both recovering - whereas previously they were hunted for food or because of a lack of awareness about conservation.

"By strengthening protection and raising people's awareness about protection, the animal populations are growing again," he said. 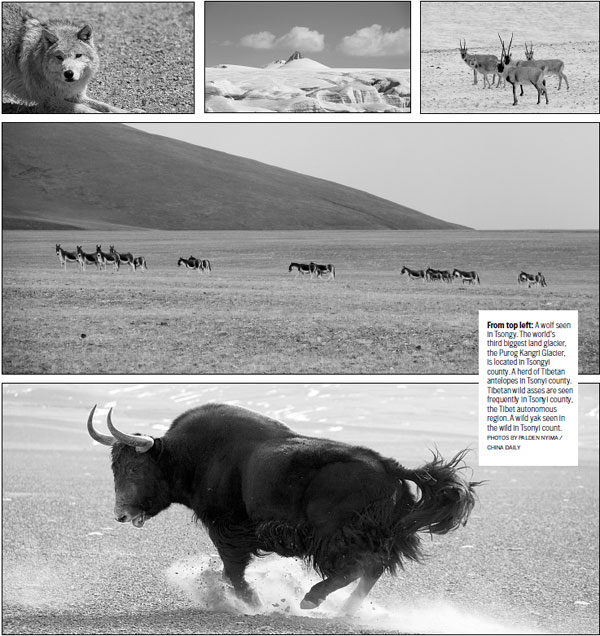