The Sanjiangyuan area, located on the Qinghai-Tibet Plateau, is the most important source of fresh water in China. Home to the headwaters of the Yangtze, Yellow, and Lancang rivers, it is known as "China's water tower." It is a wholly unique plateau wetland ecosystem and serves as an important ecological defense for the country.

In December 2021, a snow leopard was photographed looking down from the rocks of a snow-capped mountain in Cuochi village, Qumarleb county, Qinghai province. The photo prompted a flood of netizens to learn about the snow leopard online.

Snow leopards are regarded as a barometer of the quality of high-altitude ecosystems. Because of both climate change and human activities, the snowline and glaciers in the Sanjiangyuan area have been retreating annually since the mid-20th century. The area of grasslands, lakes and wetlands has also shrunk, and many wildlife varieties have become extinct. The snow leopard is also on the brink of extinction.

At present, there are about 5,000 snow leopards in the world, and more than 60 percent of them are located in China. Each year on Oct 23, International Snow Leopard Day, these big cats attain the status of internet celebrity around the world.

Over the recent years, a strong focus and continuous efforts have been devoted to promoting environmental protection at all levels in China. It is these efforts that have sketched the contours of the historic achievements in restoring the ecosystem of Sanjiangyuan.

Once known as the "ghost of the mountains", today the snow leopard is fast becoming the "returning king".

Environmental protection is an enormously important undertaking. In Chindu county, there is a Khampa man who is known as the flightless black-necked crane. This man knows exactly when the first black-necked crane lands each spring — he knows where the cranes feed in the morning, where they rest at night, when they like to dance in the wind, and when they show off their feathers. He knows how to approach a flock of cranes without disturbing them. Though the black-necked cranes take to the sky and he remains firmly on land, they travel in each other's company.

His name is Tsephel. He is 41 years old, his beard is unshaven, and he has a deeply tanned skin. Tsephel can be described as a close partner of the black-necked crane, but he is also the guardian of their common home. He is often found to pick up empty bottles and garbage bags with his calloused hands and stringing them together on a rope tied around his waist. Local people say that for over a decade, Tsephel has set off in his vehicle as soon as the sun rises each morning to clean up garbage on the grasslands, highways and riverbeds.

Inspired by their father, his five children have also joined the endeavor. His youngest daughter Gengqiu Lhamo decided to take practical action. She led her class in setting up an environmental protection volunteer group. For this, Gengqiu Lhamo won the national "Outstanding Youth of the New Era "award for 2021.

Sanjiangyuan has countless fathers and daughters like Tsephel and Gengqiu Lhamo. More and more herders are choosing to settle down, trading in their horse whips for volunteer arm bands, and serving as guardians of their common home.

As people walk on the vast land of Sanjiangyuan, looking at the expansive mountains, glaciers, lakes, and pastures, and catching sight of wild animals and birds, they cannot help but marvel at the vastness and majesty of nature and ask such questions: "What sort of relationship should nature, humanity, and economic and social development have? How do we balance conservation and development over the long term? Can humanity and nature live together in harmony?"

The words of a Chinese leader, in both 2016 and 2021 when he attended meetings of the Qinghai delegation during the annual National People's Congress session and on the two occasions when he toured Qinghai, provide a clear answer: Protecting Qinghai's ecological environment is an issue of national importance; Qinghai's greatest asset is its ecological environment, and its greatest responsibility and potential also lie in the ecological environment; "China's water tower" is the country's source of life, and protecting Sanjiangyuan is crucial to the development of the Chinese nation; China must continue to promote the construction of national parks.

The leader's important conclusions and requirements make clear the country's position, the direction of efforts, and the approach that must be taken.

The Sanjiangyuan National Park served as host to the first pilot of China's national park system. Through ecological protection and restoration projects aimed at comprehensively improving degraded alpine meadows, ameliorating degraded grasslands, tackling desertification, and promoting water conservation, the degradation of the Sanjiangyuan ecosystem has been basically checked, grass cover and grass production have increased by 11 percent and 30 percent respectively compared to 10 years ago, and the area of water bodies and wetland ecosystems has increased by 308.91 square kilometers. The headwaters of the three major rivers are once again a landscape of stunning beauty.

To promote ecological advancement, China is accelerating the development of a nature reserve system with national parks at the center. It is gradually incorporating into this system areas with the most important natural ecosystems, the most unique natural landscapes, and the richest natural heritage and biodiversity.

The first batch of five national parks, including Sanjiangyuan, cover a protected area of 230,000 sq km, which is home to nearly 30 percent of mostly protected terrestrial wildlife species in the country. This is helping to gradually bring about a beautiful and picturesque scene of lush hills and clear waters across the great land of China. 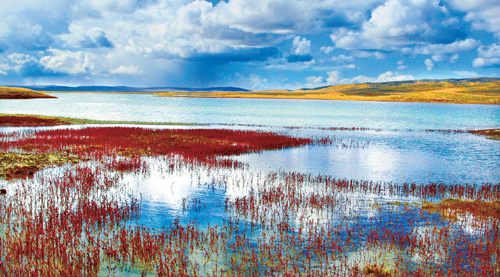 By GUO FEIRAN and QIU JU