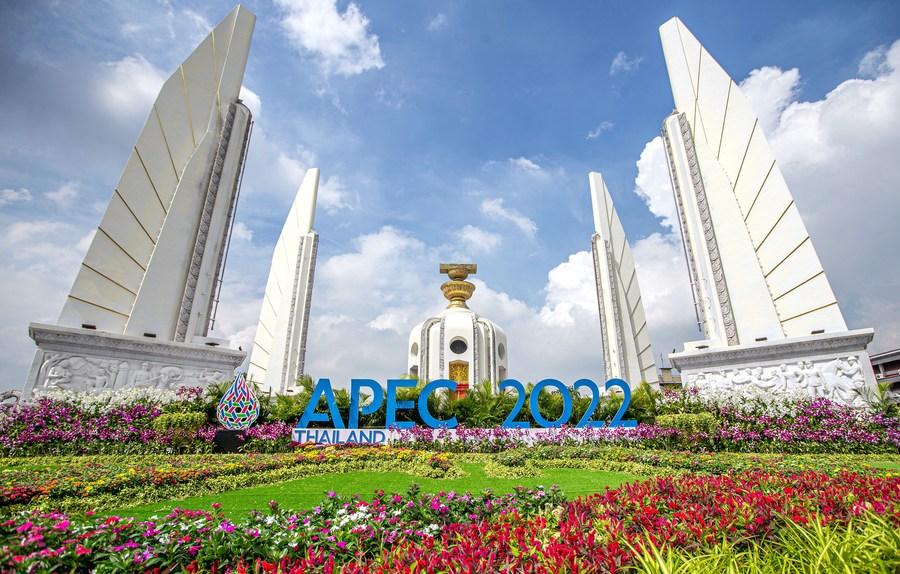 BANGKOK, Nov. 18 (Xinhua) -- Chinese President Xi Jinping underscored on Thursday that China is committed to promoting the building of an Asia-Pacific community with a shared future, and will do more to enhance the stability and prosperity of the Asia-Pacific.

Xi pointed out that the world has once again reached a crossroads. Where is it headed? What should the Asia-Pacific do? These questions demand urgent answers.

Xi underscored the need to follow a path of peaceful development. It is precisely because the Asia-Pacific was freed from the shadow of the Cold War that this region, and particularly its small- and medium-sized economies, have been able to embark on a fast track toward modernization and create the Asia-Pacific miracle. The Asia-Pacific is no one's backyard and should not become an arena for big power contest. No attempt to wage a new cold war will ever be allowed by the people or by the times.

Xi underscored the need to follow a path of openness and inclusiveness. Over the past decades, APEC, guided by open regionalism and the principles of diversity and non-discrimination, has become an architecture for inclusive and win-win regional cooperation. It is by acting on such a far-sighted vision that the Asia-Pacific has been able to seize the opportunities of economic globalization and become a forerunner of the times in pursuing regional economic integration. Any attempt to disrupt or even dismantle the industrial and supply chains formed in the Asia-Pacific over many years will only lead Asia-Pacific economic cooperation to a dead end.

Xi underscored the need to follow a path of solidarity. Over the years, the Asia-Pacific has stayed together as one big family. This region has met challenges head-on in solidarity, defused various risks and forged a sense of community through cooperation, which has laid a solid foundation for steady progress. It is important to strengthen cooperation, support and help each other, and enable the Asia-Pacific to be a leader in boosting global economic recovery.

Xi emphasized that facing these new developments, it is important to draw on past experience and lessons, respond to the challenges of the times and steadfastly advance Asia-Pacific regional economic integration, so as to jointly break new ground in development and build an Asia-Pacific community with a shared future.

First, bolstering the foundation for peaceful development. It is imperative to abide by the purposes and principles of the UN Charter, pursue the vision of common, comprehensive, cooperative and sustainable security, jointly reject the Cold War mentality and bloc confrontation, and build an Asia-Pacific security architecture, he said.

Second, taking a people-centered development approach. More should be done to ensure people's wellbeing through economic development and foster an inclusive environment for development. The developed economies in the Asia-Pacific should play a positive role and actively support the developing economies. Efforts should be made to forge a new partnership of unity and equality, a partnership that is balanced and inclusive, he said.

Third, pursuing higher-level opening-up. It is important to advance the building of a Free Trade Area of the Asia-Pacific, engage fully and deeply in the reform of the World Trade Organization, achieve better alignment among the Regional Comprehensive Economic Partnership, the Comprehensive and Progressive Agreement for Trans-Pacific Partnership and the Digital Economy Partnership Agreement, and build an open Asia-Pacific economy, Xi said.

Fourth, striving for higher-standard connectivity. Economies in this region should, guided by the APEC Connectivity Blueprint, boost hard and soft connectivity and exchange of personnel in a well-ordered way. China will actively enhance the complementarity between the Belt and Road Initiative and the development strategies of other parties to jointly build a high-quality Asia-Pacific connectivity network, he said.

Sixth, promoting economic upgrading. Efforts should be made to accelerate scientific, technological and institutional innovation, foster new economy, new types of business and new business models, and achieve digital transformation of the Asia-Pacific economy. More should be done to pursue green and low-carbon development, promote green economic sectors and green finance, and speed up the establishment of an Asia-Pacific green cooperation framework, he said.

Xi expounded on the defining feature and essential requirements of Chinese modernization and pointed out that the modernization of China, a country with over 1.4 billion people, will be of epoch-making importance in human history. China will continue to take the people-centered approach, with a goal of increasing its middle-income population to more than 800 million in the next 15 years and promoting the sustained growth of its super-sized market. China will continue its efforts to achieve common prosperity for all, provide more resources for global development cooperation, advance the Global Development Initiative, and work with all other parties to build a global community of development.

Xi stressed that China, as a member of the Asia-Pacific, has benefited much from the region and shared its development gains with others in the region in return. China is committed to promoting the building of an Asia-Pacific community with a shared future, and will do more to enhance the stability and prosperity of the Asia-Pacific. President Xi expressed his hope that business leaders will actively involve themselves in economic cooperation and China's reform, opening-up and modernization endeavors, and contribute to boosting development and prosperity of both the Asia-Pacific and the world.