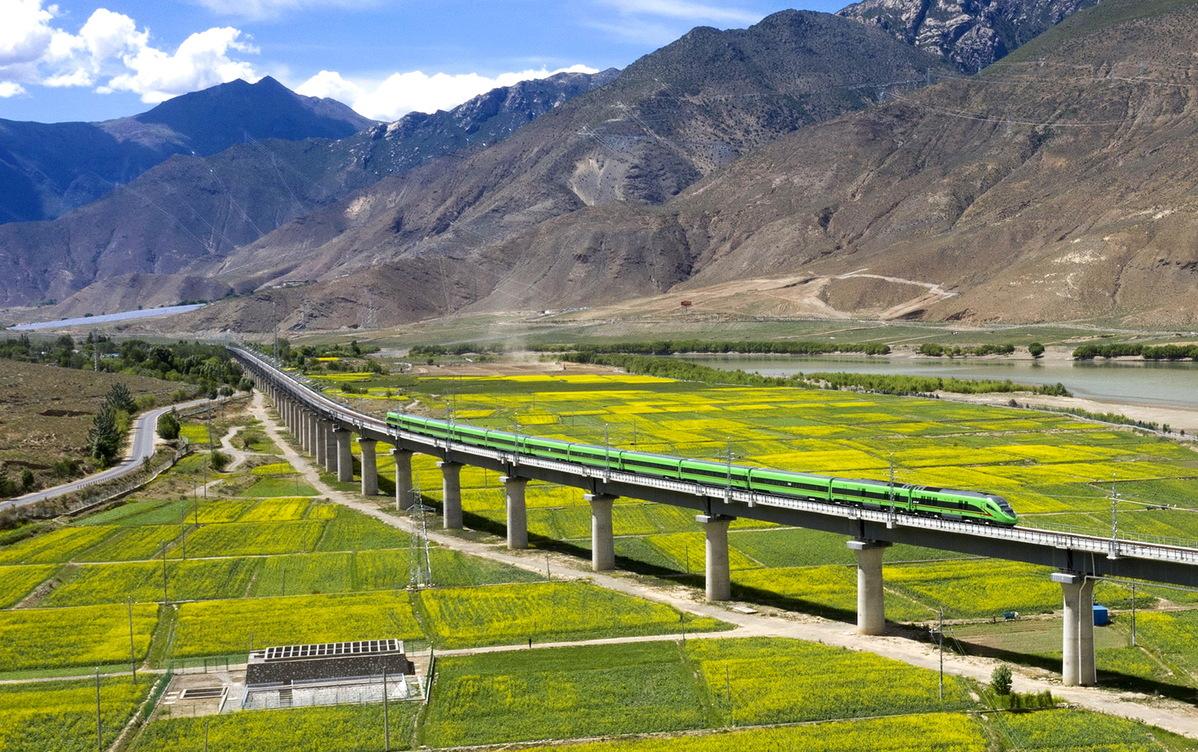 A Fuxing bullet train runs on the Lhasa-Nyingchi railway in the Tibet autonomous region on June 24, 2021. [Jiao Hongtao/For China Daily]

As a train hums its way into Shigatse railway station in Southwest China's Tibet autonomous region, some passengers on the platform approach the locomotive's cab with curiosity.

"Where is the train's steering wheel?" "How many drivers are needed to drive such a long train?"

"When I responded in Tibetan that trains on the railway do not require a steering wheel and that only one driver is needed to operate them, they were surprised to learn I'm also a Tibetan," said Sonam Wangdrak, 35. "At that time, I felt very proud."

Sonam Wangdrak's maiden encounter with a train was at the age of 16. He traveled via railway to Lanzhou, capital of Northwest China's Gansu province, to study at the Lanzhou railway machine school, now the Institute of Railway Technology of Lanzhou Jiaotong University.

Unable to afford a plane ticket, he spent three days and two nights traveling by different buses from his home in rural Chamdo to Golmud, the nearest railway station located in Qinghai province back then, to board a train.

"The train trip was amazing. It was faster and much smoother than the bus journey," he recalled.

After graduating in 2007, he received training to operate diesel-powered trains on the Qinghai-Tibet Railway, the first railway line to open in Tibet in 2006.

Situated on the Qinghai-Tibet Plateau, known as the roof of the world, Tibet has an average altitude of more than 4,000 meters and features a complicated topography.

The trains Sonam Wangdrak and his colleagues drove traversed some areas more than 5,000 meters above sea level.

"While passing through the highest area, some of us had to wear oxygen masks. I can't imagine how difficult the railway construction might have been back then," he said.

Sonam Wangdrak often spotted animals such as Tibetan antelopes, wild yaks and even bears, during the journeys, and he and his coworkers avoided sounding the horn so as not to disturb them.

Following in the tracks of the Qinghai-Tibet Railway began operation, the Lhasa-Shigatse Railway was launched in August 2014. The Lhasa-Nyingchi line, the first electrified railway in Tibet where Fuxing bullet trains run, was put into operation last year.

Sonam Wangdrak has witnessed tall buildings emerging along the railway on the plateau, with industrial clusters and shopping streets mushrooming near the stations.

The Lhasa railway station, where the three lines meet, has seen steady growth in passenger flow, surging from 2.24 million in 2007 to more than 4 million in 2021.

Tsogpa, who has been working at the station since 2006, said people of various ethnic groups in Tibet are eager to embrace new technology and modern modes of transportation.

"They prefer trains because the journey is smooth and fast and the ticket fare is cheap," said Tsogpa, who is the office director of the station.

In the future, the Sichuan-Tibet Railway will connect Sonam Wangdrak's hometown with the rest of the country.

"I hope my mother can board the train I drive soon," said Sonam Wangdrak, adding that he cannot wait to return home by driving a train.