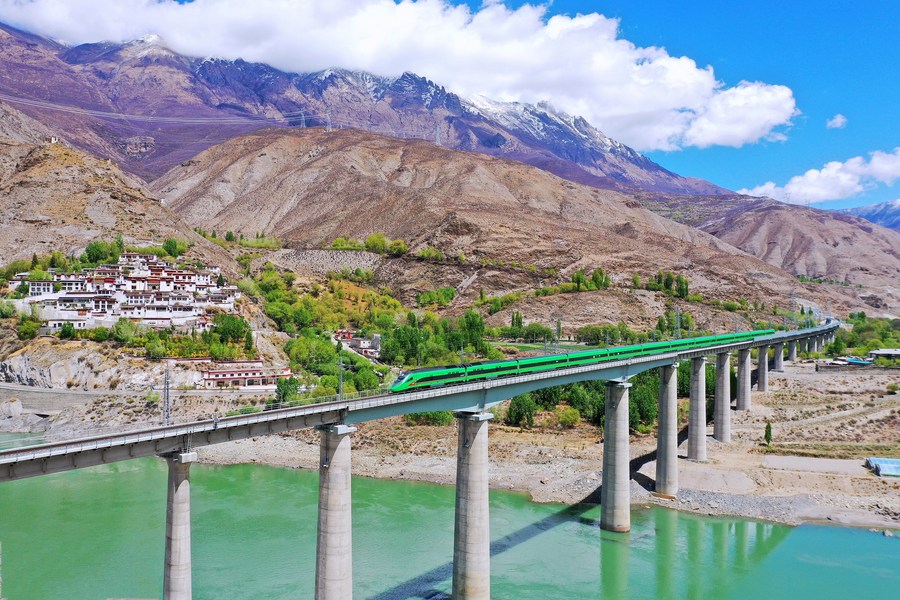 LHASA, July 5 (Xinhua) -- The transformations in southwest China's Tibet Autonomous Region have been "very impressive," providing the local population with much-needed development, as well as important medical and care services, a French writer told Xinhua in a recent interview.

Lea Bessis, a sinologist who has visited Tibet four times, encouraged Westerners to question the dominant discourse that has been propagated by some Western media, and to see China from another angle.

"If I could do it, I think we can all do it, and see China from another angle," she said from France in an email interview.

When Bessis was young, she dreamed of visiting Tibet to meet its inhabitants living in the heart of the highest mountains in the world.

The dream came true when she grew up. In 2007, she crossed the autonomous region, entering Nepal and going on to India. She returned to Tibet in 2012, 2016 and 2019, witnessing enormous changes during these visits.

"On each trip, I could see the transformations. First of all, the infrastructure: roads have been created, railroad lines, services like hospitals, schools, universities, old people's homes ... It is very impressive," Bessis wrote, using her pen name.

Over the past decade, the total length of roads in Tibet has almost doubled to over 120,000 km, including more than 90,000 km of rural roads, according to the regional department of transport. Three railway lines have formed a "Y" shape on the plateau region, with the latest Lhasa-Nyingchi line, the region's first electrified railway, inaugurated for operation on June 25, 2021.

The development of roads and railroads, Bessis said, is one of the most important things. It has allowed families to develop businesses, and young people to study and travel outside the region. "Developing the roads means developing the link between cultures, knowledge. And of course, it also helps to develop the economy of the region," she said.

According to the sinologist, such changes have brought deeper improvements to the daily lives of the local population, including access to health care.

"Let's not forget that the average altitude is well above 4,000 meters and that the human body needs the care to survive such conditions," she said.

Bessis said some Westerners do not perceive Tibet's developments as a common benefit for the population. On the contrary, the certain Western media presents this as "oppression."

This repetition, over and over again, by Western media, is based on a view that she calls "selfish."

"It is as if the region of Tibet had to remain in the Middle Ages so that Western tourists would have the impression of being out of the ordinary," she said. "It is selfish because it means leaving the Tibetans in a situation of misery, of early death, just for the pleasure of rich Western travelers."

The other reason for the blindness of the West is its disregard of China, according to the writer. "To recognize that China has developed and succeeded in its challenge of eradicating poverty would require the West to recognize its own failures. This still seems impossible today," she said.

In her opinion, the problem of the Western vision is, on the one hand, a form of "selfish" education, and on the other hand, the submission to a repeated discourse on a vision of China not as a friend but as an enemy.

China must emancipate itself from this negative vision by continuing to forge links with other nations, developing its multilateralist vision and its vision of a community of destinies, she said.