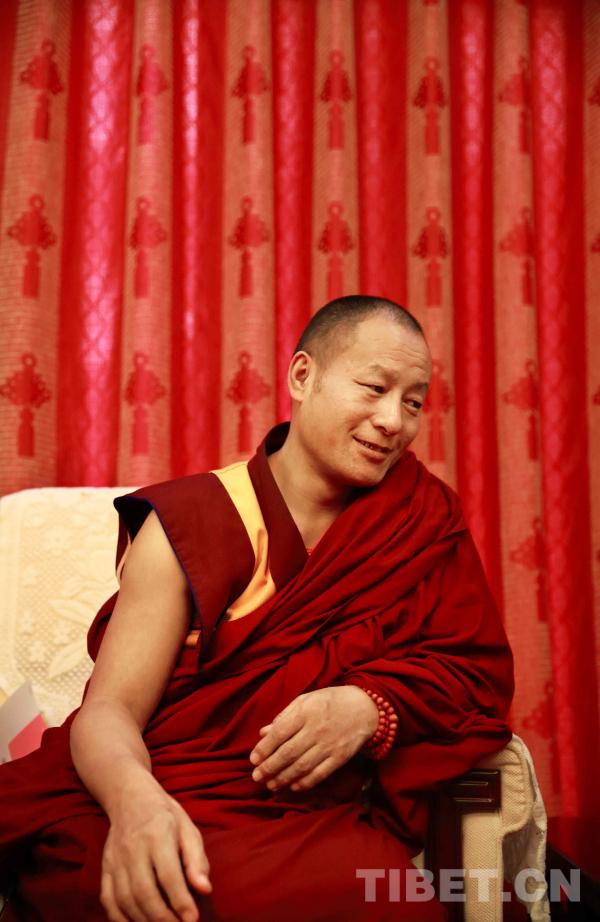 “The Buddhist college students are from Tibet Autonomous Region and the Tibetan-inhabited areas of four provinces, namely Sichuan, Yunnan, Gansu and Qinghai. They are attached to different sects of Tibetan Buddhism and are all very well versed in Buddhism. Through the Buddhist college’s broad exchange platform, they’ve learnt from each other and get along well,” said Lhoqu Khenpo, the sutra master of the High-Level Tibetan Buddhism College of China, during an interview.

[Photo by the High-Level Tibetan Buddhism College of China ]

The High-Level Tibetan Buddhism College of China was established on Sep. 1, 1987, in Beijing’s Xihuang Monastery and committed to foster high-level Tibetan Buddhism talents who love the country and religion. Lhoqu, now a full-time master of the sutra at the college comes from Guoluo Tibetan Autonomous Prefecture in Qinghai Province.

The college combines traditional ways of learning sutra with modern teaching methods. “Students not only learn about Buddhist knowledge, but also modern cultural knowledge including law, history, Chinese, computing and others, which helps broaden their horizons,” said Lhoqu. “Coming from villages to the city, the students will have to gradually adapt to city living environment. They are adept using the Internet and Wechat.”

"Perhaps the greatest benefit of the Buddhist college is to exchanges with Buddhist monks from different sects of Tibetan Buddhism, thus continuously improving one’s own achievements in Buddhist studies,” Lhoqu said. The students come from a number of different Buddhism sects including Gelug, Nyingma, Kagyu, Sakya, Jonang and other sects. Sparks of wisdom often surface when debating, which is “generally impossible to achieve in the common monastery.”

In addition, the Buddhist scholarship system at the college differs from that of traditional monasteries. Currently, each Tibetan Buddhism sect has its own study system, notably the Gelug sect’s Gexi Lharangba examination system, which is the most famous. The college has the equivalent to the doctorate Tuorangba title and the master's Zhiranba title.

“This is a new Tibetan Buddhism scholarship awards system formed by drawing from the traditions of Tibetan Buddhism monastery study and historical experience of the scholarship exam, as well as absorbing new methods from modern education,” said Tashi, one director of the college.

With regards the differences between Tuoranba, Zhiranba and Gexi Lharangba, Lhoqu said, the Buddhist college’s scholarship is aimed at Tibetan Buddhism as a whole. Gexi Lharangba is the highest degree for Gelug monks studying Exoteric Buddhism and must be awarded in front of the Jokhang Temple in Lhasa.