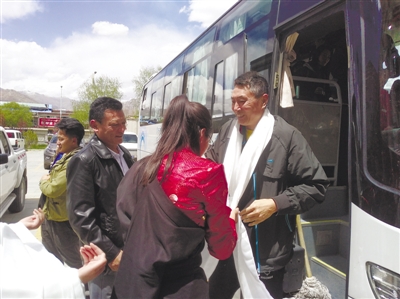 Recently, the Lhasa Pure Land men's basketball team and their head coach, Zhang Zikai, arrived at Lhasa Gonggar Airport. It is understood that they have come to Lhasa to participate in the opening game for the new season of the men's National Basketball League (NBL) of China on June 10, when the Lhasa Pure Land team will face the Fujian Lightening.

The NBL was established to broaden the league to second- and third-tier cities. In many places where the league is held, local fans pay as much attention to NBL games as other large-scale events, which has created a valuable experience and audience base for competitions.

"The Lhasa Pure Land team is a relatively young team; the average age of players is 25," Zhang Zikai said. "The oldest player is 33 years old and the youngest is 19. Their average height is 195 cm, with the highest player standing at 218 cm. The most important thing after coming here this time is to acclimatize to the climate, because we will be facing the Fujian Lightening for the first game of the season in Lhasa."

21-year-old Lhamo Tseten from Qinghai first played basketball at age 9, and at age 15 he participated in professional basketball training.

Joining the Lhasa Pure Land team this year, he said, "I've been in the inland area of China since I was young, and I used to play for the Fujian Youth Team. This is my second time in Lhasa; I've never played a game on the plateau before, but I've done a lot of stamina training at high altitude. There are five Tibetan players on the team this year. As one of them, I must play well in the opening game in Lhasa."