"A region has to build roads if it wants to build wealth," the saying goes, and they are certainly sticking to it in Tibet autonomous region, which covers an area of more than 1.2 million square kilometers.

"It was a headache to travel to the Ngari prefecture in the past as there were only cobblestone and mud roads. It might take one week from Lhasa to Ngari by truck, and you had to take water and food with you as there were no restaurants along the way," said Tsering, a driver working in Lhasa.

But now, it takes Tsering less than four days to travel between Lhasa and Ngari as there are several blacktop highways linking them.

Highways are blood vessels for the region, and Tibet has seen its economy invigorated by improved transport conditions in the past five years.

Tibet's highways, which extended 65,198 kilometers in 2012, have grown to over 82,000 km today, extending by more than 4,200 km each year. The distance covered by high-grade highways, which are similar to expressways, saw a sixfold increase from 2012 to 2016, according to Chen Chao, deputy head with the transport bureau of the autonomous region.

In 2013, the Medog Highway opened to traffic, linking the outside world with the remote region of Medog in southeastern Tibet, which was the last Chinese county without highway access.

Rapid highway development has occurred due to continuous fixed investment in transport, which grew from 10.1 billion yuan ($1.5 billion) in 2012 to more than 40 billion yuan in 2016, increasing by 41.3 percent each year.

Thanks to strong investment in infrastructure and the growth-driving effects of improved transport, Tibet posted impressive economic growth in the past five years, recording an annual average GDP growth of 11 percent. The region's economy grew 10.8 percent year-on-year in the first half of 2017, outperforming every other provincial region.

"Once transport barriers are removed, there will be more commercial activities like logistics and tourism, thus improving local people's livelihoods," Chen said.

And there is another benefit. Rather than being built at the expense of the environment, building highways could actually offer some protection.

When there were no highways, drivers would go across a region randomly to find less muddy roads, destroying neighboring vegetation. The grass and plants are now spared as drivers run on a fixed route, Chen said.

The high-grade highway under construction to link Lhasa and southeastern Tibet's popular tourist spot Nyingchi is a case in point. About 400 million yuan has been spent on ecological restoration and high-tech methods have been used to consolidate soil along the highway.

By 2020, total distance covered by highways in Tibet will reach 110,000 km, with all the counties having access to blacktop highways and all towns being connected by cement roads. It will take less than three hours for people to travel from Lhasa to four other major cities. 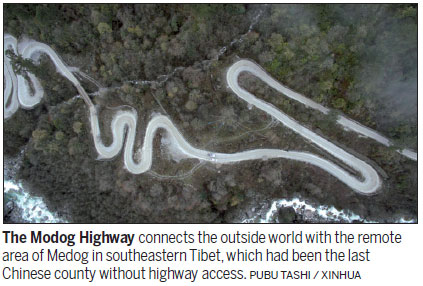 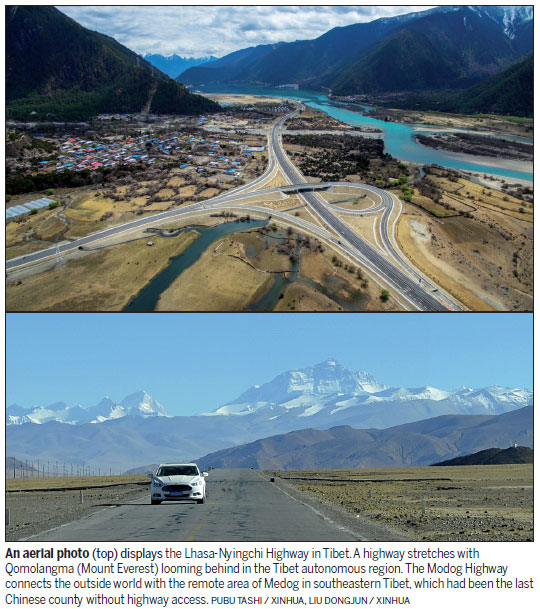