The Tibet autonomous region plans to upgrade the natural reserve around Siling Lake - the region's largest lake - and expand it to surrounding areas to establish the World's Third Pole National Park on the Qinghai-Tibet Plateau.

According to a plan obtained by China Daily from the regional government, the World's Third Pole National Park would be established within Baingoin, Xainza, Nyima and Shuanghu counties - together covering 281,150 square kilometers - in the northern Nagqu prefecture.Such plans are in the early stages, and it could be some time before a new national park opens. For now, plans are being developed and the park's exact area has not yet been decided. 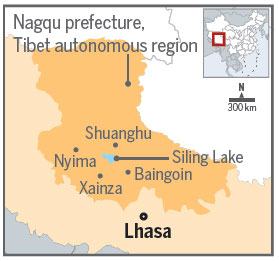 The South China Morning Post reported in late April that a planned national park would cover more than 2.5 million sq km, including the entire Qinghai-Tibet Plateau, making it the biggest national park in the world. But the new plans seem to differ in scope. Northeast Greenland National Park, covering an area of 972,000 sq km, is the world's largest.

The Qinghai-Tibet Plateau is in the southwestern part of China, with an average altitude of about 4,000 meters above sea level. It often is called Earth's Third Pole and plays a vital role in shaping ecosystems in Asia.

Before establishing the ambitious national park, officials in the region plan to upgrade the Siling Lake natural reserve in Nagqu, which will be an important part of the national park, the plan said.

As the largest lake in Tibet and the second-biggest saltwater lake in China, Siling Lake is at an altitude of 4,530 meters above sea level. China established a national natural reserve covering 18,940 sq km to protect the fragile ecosystems of the lake and its surrounding area in 2003.

According to the regional government, visitors could witness the migration of more than 100,000 Tibetan antelope in the reserve during the breeding season, which is almost as magnificent as the animal's migration in Africa. The reserve also is the world's biggest natural reserve for protecting the black-necked crane.

The regional government proposed allowing a limited number of people to watch wild animals via organized tours in the experimental zone of the reserve and ensure no people can enter the core protection zone.

By launching high-end tours in the reserve, the local government hopes the local herdsmen can be fully involved in natural conservation to make a living by accommodating to the needs of the visitors instead of herding or mining.

According to the plan, the region will further expand the reserve to four counties of western Nagqu and establish the World's Third Pole national park in the future after human interference is eliminated and the wild animal population increases.