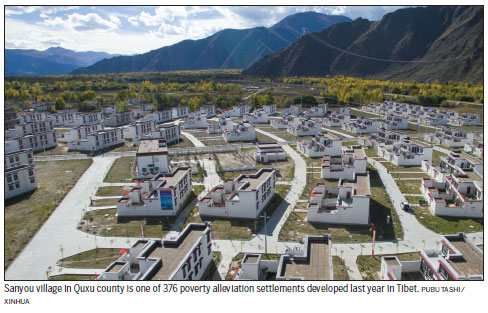 Around 163,000 residents of the Tibet autonomous region will be relocated to more habitable locations this year as part of poverty alleviation efforts, the fifth session of the 10th Tibet People's Congress has heard.

Per capita disposable income of poor residents is expected to increase by 16 percent, according to the latest government work report, which said that 130,000 residents, 20 counties and 1,705 villages would be lifted out of poverty this year.

Tashi Phuntsok, the Party head of Amdo county who attended the people's congress, described relocation as a key part of poverty alleviation.

"The harsh environment in certain areas cannot support the people who live there - that is the key reason for off-site relocation," the 43-year-old said.

"Our priority is residents with health problems, limited land and animal resources, and families without a breadwinner."

Amdo county has 9,582 residents in 2,677 households who are defined as poverty-stricken. They account for almost a quarter of the county's total population of 43,000, creating a huge impetus for action, according to the Amdo county government.

Yet relocation is not the only solution for poverty alleviation in the region, with governments also looking to provide jobs to relocated residents.

"A new house, on its own, will not alleviate a person's poverty, it is crucial to also provide them with jobs to sustain a stable family income," Tashi Phuntsok said.

"I have read the government report, and poverty alleviation was listed as a priority for 2017, which is a big encouragement for us."

Elsewhere, the Nagqu county government has set up a commercial rental project in the county town with the aim of providing work for residents in relocation communities.

The project provides buildings for relocated residents that they can either operate their own businesses from or lease to other people.

Other jobs available for relocated residents include those at hotels and car washes, as well as concrete batching plants and on transport teams.

"Additionally, the relocated families receive government funding for protecting the grasslands, water resources and wildlife, and there is also an education payment scheme," Tashi Phuntsok said.

As Amdo county is a nomadic area sometimes described as the Northern Gate of Tibet, residents are also being encouraged to produce traditional products and operate inns and restaurants for tourists.

"It is important that the relocated residents are independent and enthusiastic about their work, otherwise they will find it hard to rid themselves of poverty," Tashi Phuntsok said.

So far, 143 households have been relocated in Amdo county and the majority of residents have found work, with some employed in ecological positions as protectors of grasslands, water, and wildlife.