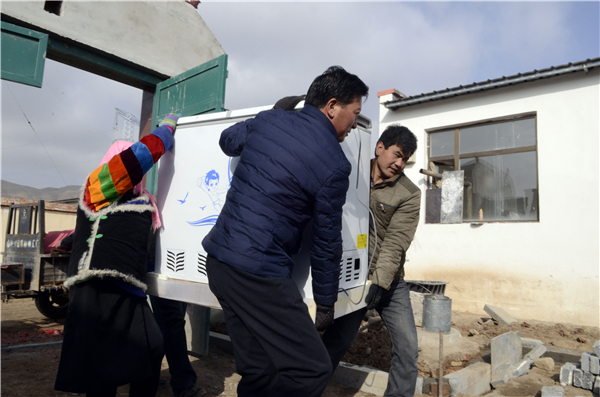 Lyu Zhifa, 57, has a lifelong grudge against the high mountain where he grew up -- he blames it for the loss of his grain, fortune, and father, not to mention his donkeys.

Lyu lives in Banyan village, Huzhu Tu ethnic county in Qinghai province, Northwest China. At 2,800 meters above sea level, the village is located on the Qinghai-Tibet plateau. On Monday, hundreds of farmers started to move into new apartments at the foot of the hill, amid a nationwide effort to aid poverty-stricken populations through relocation programs.

About 129 households in Banyan village are ready to move, 72 of which live below the poverty line.

The new houses are about seven kilometers from the old ones. "The seven kilometers, I've traveled hundreds of times. The road makes it difficult for almost everything, getting water, schools, getting a doctor, or marrying a woman," Lyu said. "In the last 30 years, I've had five donkeys for ploughing the field and carrying barrels of water, and three of them fell down the mountain and died."

In 2014, Lyu's son was working in Tibet, and there were no spare hands to help with the harvest. He borrowed a mule from his neighbor to carry grain. The road was too steep, and the animal slid down the hill.

"All the grain was gone; my whole year's work was lost. The mule fell onto a soft piece of land and survived," Lyu said. "I would have jumped off the hill if the mule had died. It was a lucky one. I knelt down on the ground and kowtowed to the heaven three times for good luck," he said.

A few years back, Lyu's father had a stroke, but rain made the roads slippery and unfit for them to travel. "He was sent to hospital more than a day after the stroke. It was already too late," said Lyu. His father died a few years later.

Lyu likes to sing Tu ethnic ballads. "I used to sing about hardship, the mountain, drought; now I sing about new homes and a new life now," he said.

"In such harsh situations, few people want to hold on to their old home," said Su Jiangning, Communist Party secretary of the village.

Xi stressed the importance of listening to what the villagers want and letting them participate in planning their new villages.

"The building of new villages should be integrated with measures to promote production and employment, improve basic public services, and protect ethnic, regional and cultural features and styles," Xi said. Local government in Huzhu county used a poverty relief fund to build new homes. The poorest families only had to pay 4,000 yuan for an 80,000-yuan four-bedroom apartment in the new village. Wealthier farmers pay about 20,000 yuan for the new housing, Su said.

The county poverty-relief department has funded farmers to raise pigs, and offered training in welding, driving excavators and cooking.

Lyu's son, Lyu Zengxian, makes a living by repairing home appliances in neighboring Tibet. With the new house, he chose to stay.

"I would like to rent some space and open up a shop here," he said.

By 2020, about 10 million people living under the poverty line will be relocated nationwide, according to a National Development and Reform Commission plan.