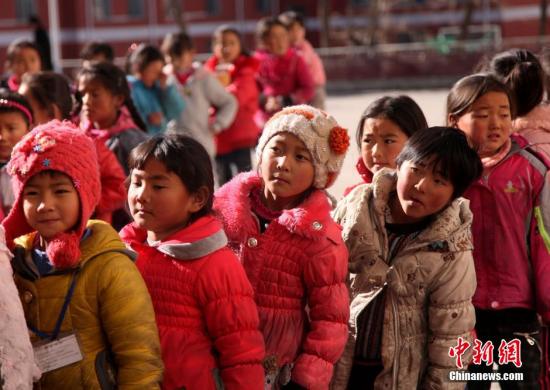 62-year-old Kamao Jia used to live in a poor village where there is a serious lack of water and inconvenient transportation for half of her life.

Nowadays, she has moved to the Gari village which is just 3 kms away from the Tongren County, Hainan Tibetan Autonomous Prefecture of NW China's Qinghai Province. She is now living in a tile-roofed house with a small yard.

Qinghai is the largest Tibetan-inhabited area outside of the Tibet Autonomous Region. There are 10 Tibetan autonomous prefectures nationwide, amongst which there are 6 in the Qinghai.

The Qume village in the Nyanthok Township of Tongren County where Kamao Jia lived before has 81 households, 292 people, where every person has 0.1 acre of field land on average. It is a typical poverty village located at a high altitude level with harsh natural environment serious geological disasters resulting in a hard life for the local people.

Kamao Jia recalled that when the villagers wanted to go to the water site to take water they had to walk 2 km, and indeed went all the way there and came back.

The 80-year-old Gazangjia has similar feelings as Kamao Jia ’s, “before we had to spend half a day to walk from the mountain down to the town to see my son. After the relocation policy, infrastructure has been improved; therefore we are now just 30 minutes away from the town.”

In 2014, Kamao Jia and the villagers eventually shook off poverty. As a poverty villager who was in the first batch of the relocation project targeting the Gari Village, Kamao Jia has moved into the new Gari Village which was built by the government and is located at the outskirt of the town.

Her new tile-roofed house is 90 square meters and is equipped with a television and a washing machine for the first time. The government has also given her and her husband subsidy which numbers to over 1000 yuan monthly.

With the poverty relief targeting the whole village, more effort has been put into helping poverty stricken Tibetan herdsmen resolve the difficulties regarding drinking water and housing restoration, therein providing to them some other preferential policies including skill training, according to Li Zhanguo, deputy director of the Bureau of Poverty Relief of the Tongren County.

It is planned that during the “13th Five-Year Plan”(2016-2020), Qinghai will finish the relocation task benefiting 200,000 people and it is estimated that by the end of 2018, the province will completely realize poverty relief.