The mountain cat's status has been upgraded in the world from 'endangered' to 'vulnerable', but its future remains uncertain, as Cui Jia reports from Urumqi, Xinjiang Uygur autonomous region, with Yang Yang in Yushu, Qinghai.

When Huang Yahui saw a snow leopard sitting in the snow-covered Tianshan Mountains in the Xinjiang Uygur autonomous region, glancing down at her like an emperor trying to decide if the unexpected guest was actually worth his valuable time, she suddenly understood why the big cat is known as the "king of the snowy mountains".

About 90 seconds later, the snow leopard turned and vanished. He was obviously not interested in Huang or the other volunteers from Wilderness Xinjiang, an NGO based in Urumqi, the regional capital, which monitors local wildlife, especially the famously elusive snow leopards which are gradually becoming less mysterious to Chinese naturalists.

In recent years, a growing number of these big cats have been captured on film as camera traps have been set up in habitats around the country by volunteers from several different NGOs.

The hope is that the entire ecosystem will benefit from greater protection of this flagship species which is becoming increasingly popular, as evidenced by the animal's co-starring role with pandas and golden monkeys in the Disneynature documentary Born in China, which premiered in August last year.

Despite their growing exposure, it is still unusual to encounter a snow leopard in the wild. Huang never fails to experience feelings of unreality when she views footage of the magical meeting in January 2015.

"What shocked me most at the time was that we saw him just 60 kilometers from downtown Urumqi. We didn't know they lived so close to us," the 33-year-old said.

Since 2014, with help from the local forestry department and partner NGOs, Wilderness Xinjiang has installed 100 camera traps across an area of 300 square kilometers in the mountains south of Urumqi.

Footage from the cameras has enabled the team to identify 27 snow leopards based on the unique patterns on their fur. They estimate that more than 100 snow leopards are living near Urumqi. The motion-triggered cameras have captured a female teaching her cubs how to hunt and the cubs' attempts to play with the equipment.

The density of snow leopards in the Tianshan Mountains is much higher than on the Qinghai-Tibet Plateau - the animal's best-known habitat in China - but their home ranges are relatively smaller, according to Huang.

The big cat hadn't been seen in the area since the 1960s until one triggered a camera set up by Wilderness Xinjiang in the mountains near Urumqi in 2014. News of the sighting spread quickly because people couldn't believe the mountain's dominant predators were living so close to their favorite weekend barbecue spots.

"I think they have always been there. We just didn't look for them," Huang said. The cameras also captured images of ibexes - a major prey species of the big cats that are built to hunt in the mountains.

Snow leopards have short, strong front limbs and longer hind limbs, which help them to cover about 10 meters in a single leap. Their extra-long tails help the cats to maintain balance and also provide extra warmth when wrapped around the body.

Listed as a Class A protected species in China, snow leopards can mainly be seen in high-altitude areas in the provinces of Qinghai, Gansu and Sichuan, plus the Xinjiang, Ningxia Hui and Tibet autonomous regions. China is also home to as much as 60 percent of the world's snow leopard habitats. 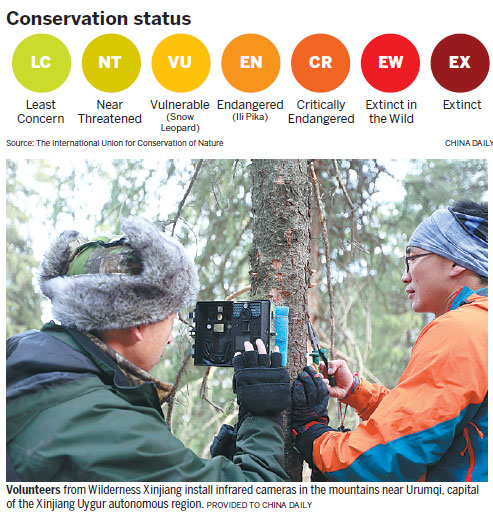 According to the Snow Leopard Trust in the United States, there are as many as 6,390 living in the wild. Some experts estimate that about 4,500 of the big cats live in China, according to the International Union for Conservation of Nature.

In September, the union said the number of snow leopards is believed to have risen in the Sanjiangyuan region of the Qinghai-Tibet Plateau in the past 20 years, along with the numbers of major prey species, including the Himalayan blue sheep. The region is the source of three major rivers: the Yangtze; the Yellow; and the Lancang.

Moreover, there are now 3.31 snow leopards per 100 sq km in the Qilian Mountains, which straddle the Gansu-Qinghai border. Surveys conducted in the 1980s suggested densities of less than 1 per 100 sq km, according to the union.

Zhao Xiang, director of the Shanshui Conservation Center's Sanjiangyuan project, said there are about 1,000 of the big cats in the area, making it one of the world's biggest contiguous snow leopard habitats.

Founded in 2007, the NGO, which is based in Beijing, aims to develop community-based grassroots conservation solutions in West China.

On August 15, the center set up a workstation built from removable cargo containers in Angsai, a township in Qinghai's Dzatod county in the core area of the Lancang River section of the Sanjiangyuan National Park. Established in June last year, it was China's first national park.

"We teach the locals to set up camera traps, but they are the experts at picking the best spots because they are familiar with the local wildlife," said Li Yuhan, 23, a volunteer and research student at Peking University who is in charge of the workstation's operations.

Tashi Dongdre, the township head, said, "Local Tibetan herdsmen living in the national park will be trained and paid to work as rangers."

In fact, 42 herdsmen from nearby Nyedo village have already become wildlife inspectors, setting up and maintaining camera traps. So far, the cameras they have set up across an area of 800 sq km have identified 24 snow leopards, Tashi Dongdre said.

"In addition to the big cats, the cameras have recorded the activities of other animals such as leopards, bears, foxes and domestic animals. Every species has a special role in the ecosystem."

As snow leopards are one of the top predators in the area, the rise in their numbers indicates that the local ecosystem is healthy, he added.

Tashi Dongdre said 80 herdsmen from two other villages in the township will join the inspection teams this year to set up enough cameras to monitor an area of 1,800 sq km.

In 2015, every family in Angsai lost an average of five yaks to predators, so a compensation system was established to ensure that the locals don't hunt the big cats, he said.

An insurance fund has been set up by the township government, the herdsmen and NGOs so villagers will be compensated if they can prove that their livestock has been killed by wild animals.

"If the herdsmen lose out as a result of the conservation efforts, they won't undertake them on a long-term basis," Tashi Dongdre said.

Tongsin, a resident of Nyedo village, is one of 468 herdsman rangers from the township. His duties include monitoring plants and wild animals across a specific area for 22 days per month.

The local Tibetans are born wildlife guardians, according to Li from the workstation. "They stop people from cutting down trees. No one has told them to do it, they just do," she said.

Before the Beijing native arrived at the workstation, she wondered how the nature park could work, given the large number of people living within its boundaries. "Now I see that having these residents is a bonus. Also, the locals are Tibetan Buddhists who abhor killing, so they won't hurt the wildlife," she said.

The volunteers will help to install a further 100 camera traps this year, and will also teach the inspectors how to secure the cameras and replace the memory cards every three months.

"We normally find someone to pretend to be a snow leopard during the training sessions so the locals can gain a better understanding of how the camera traps work," she said. "Volunteers come and go, so the local herdsmen's initiative is the key for future conservation."

On Sept 14, the International Union for Conservation of Nature upgraded the snow leopard's status to "vulnerable" following a three-year assessment. The animal was listed as an endangered species in 1986.

The upgrade came after experts determined that the big cats no longer numbered fewer than 2,500 in the wild, and the population was not declining steeply - the two criteria for being classified as "endangered". The union added that snow leopards should have been reclassified as "vulnerable" in 2008, but that failed to happen as a result of mistakes in data analysis.

However, rather than being removed from the union's Red List of Threatened Species, the animal has simply been given a different Red List status, meaning it still faces a high medium-term risk of becoming extinct in the wild.

Zhao, from Shanshui, said the animal's Red List status shouldn't be the only reason to provide it with better protection. The ultimate goal is find a way for people to better coexist with the big cats because human interference poses a major threat to them.

Huang, from Wilderness Xinjiang, echoed Zhao's words: "Protecting snow leopards in the Tianshan Mountains is actually a way of protecting the area's entire ecosystem. All species will benefit, including humans. The snow leopard is just the spokesperson for the ecosystem in which it lives, and we volunteers are the big cat's spokespeople."