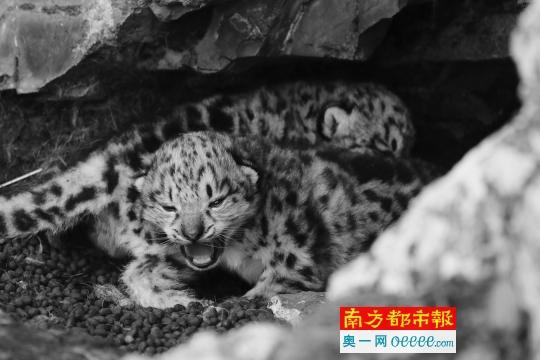 Snow leopard cubs have recently been spotted in bushes in the headwater region of the Yangtze, China's longest river.

The two snow leopard cubs were found by a Tibetan named Tsering Gyatso at a den on a mountain in Chidu county, Yushu Tibetan Autonomous Prefecture in northwest China's Qinghai Province Thursday. He reported finding the cubs to the local government.

On Friday morning, scientists rushed to the site. They said the cubs were about two-weeks old and in good health, according to Rinchen Nyima, deputy director of the county's cultural affairs bureau.

The cubs were found in the bushes rather than their traditional habitat in bare rocks on high mountains.

The find, which may indicate that the snow leopard population is increasing or that their habitat has expanded, will help researchers to learn about living habits of the snow leopard in bushes and forests, said Xiao Lingyun with Peking University Center for Nature and Society.

Rinchen Nyima said the mother leopard went back to the den to feed the cubs Saturday morning.

Snow leopards are a Class A protected animal in China and are classified as "endangered" by the International Union for Conservation of Nature. They live in the Himalayas in central and south Asia at an altitude of 2,500 to 4,500 meters. They have been spotted in China's Gansu, Qinghai, Sichuan, Tibet, Yunnan and Xinjiang.