"Protecting the ecological environment is protecting life, and life not only includes people and snow leopards, but all beings."Golog Zhoujie, wearing burgundy robes and with a camera over his shoulder, expresses his views on ecological protection.

Golog Zhoujie was born in a hunter family and the 46-year-old is now Khenpo of Qinghai’s Palyul Monastery. In 2010, he was given a new name, “Snow Leopard Lama”.

"My hobby used to be taking photos of plants and trees, but in 2010 George Schaller, an American zoologist, said something that inspired me. He hoped that I can try to take pictures of snow leopards and protect them,” said Golog. 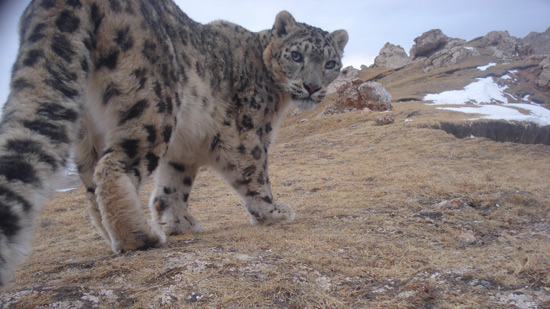 "Golog Zhoujie is against herders hunting snow leopards, because he believes they are weaker when compared to human beings; but when snow leopards hunt livestock, he drives off the snow leopard, because in this instance the livestock are weaker,” said director Geng Dong, who has made a documentary named“Snow Leopard”about this Lama protecting the snow leopard.

"We don't have a special statement about protecting the snow leopard. All we can do is using religious, scientific, legendary and other means to persuade herdsmen not to harm snow leopards,” said Golog.

"Herdsmen are gradually beginning to understand the snow leopard (its food, habits etc.) and will no longer drive away their own sheep, won’t throw rubbish freely and pollute the water, because these are an important part of the ecosystem.”

Data shows that China has the largest distribution of snow leopards in the world, with a population of 2000 to 2500, among which about 1000 of them are living in the Sanjiangyuan region(the source region of the Yangtze River, the Yellow River and the Lancang River) in Qinghai province, and most of their habitat overlaps with human activity.