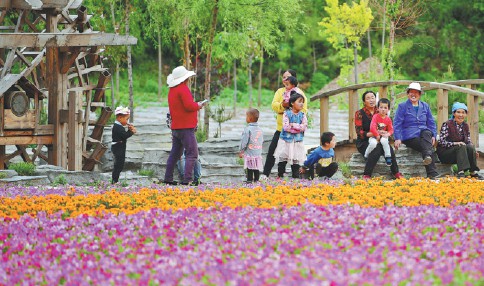 LANZHOU－Geru Tashi, a 57-year-old former Tibetan herdsman, is the first person in his village to learn how to make coffee.

He lives in Kasho village, Gannan Tibetan autonomous prefecture, Gansu province, where he runs a homestay.

Having drunk traditional butter tea for most of his life, Geru Tashi has added the aroma of roasted coffee beans to the smells of the village. His coffee-making skills attract many tourists, including foreigners on road trips, who like to sip coffee and relax on the grassland.

"Our village is getting more beautiful, with more tourists. In just two or three years, I have changed from a herdsman to a small businessman who benefits from tourism. I had a net income of 30,000 yuan ($4,500) in 2019," he said.

Kasho received 800,000 visits last year, with more than 300 villagers working in the tourism sector. A total of 52 homestays earned more than 30,000 yuan each that year.

"It feels totally different this time, compared to when I traveled here five years ago," said Wang Ning, a tourist from Shanghai, as he sampled some Tibetan food.

"I cannot see any rubbish and the gorgeous scenery really lingers in my heart."

The village grew out of a need to find homes for herdsmen exposed to harsh weather and afflicted with poor health. In the early days of its establishment, yak and sheep dung were often visible on the roads. Many people lived with livestock and piled up rubbish at their front doors.

The unattractiveness of the village deterred tourists from stopping to enjoy the grassland and scenery surrounding Kasho.

Changes began with the "environmental revolution" launched by the Gannan government in 2015, along with ongoing projects to boost tourism. Since then, the government has concentrated on cleaning up the environmental problems that were hampering the village's economic development.

With the government's support and heightened awareness among the herdsmen, the village has been transformed into a scenic spot. The dirt road has been paved with stone slabs and the water supply, drainage and public toilets have all been upgraded.

The village now provides comfortable hotel accommodations along with cultural experiences and folk custom activities for tourists, while maintaining its rustic charm.

These days, tourists visiting the prefecture, which covers 45,000 square kilometers, will rarely see any rubbish.

With more herdsmen accepting the changes to their traditional lifestyles, there has also been a general improvement in the health of the local population.

The prevalence of echinococcosis, a potentially fatal disease caused by tapeworm infections, has greatly decreased, and the life expectancy of Gannan residents has risen to 66 years, from just 34 years seven decades ago.