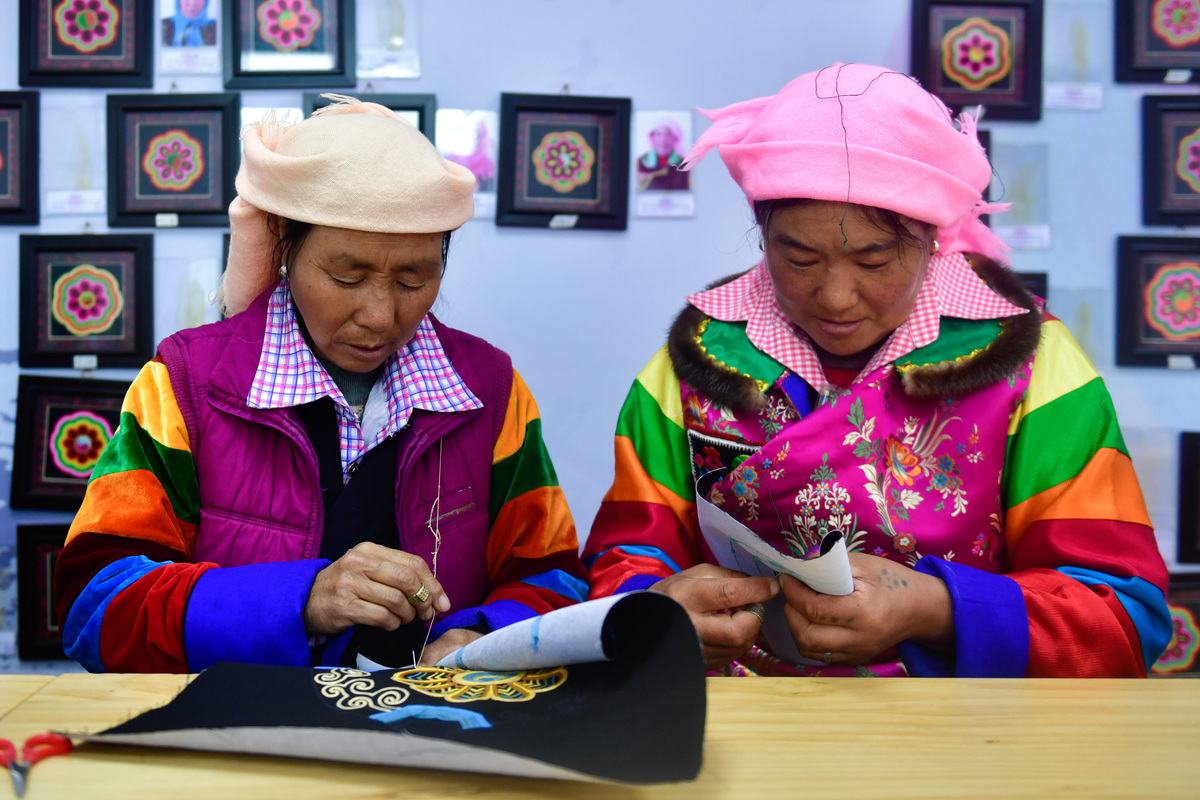 Like many women of the Tu ethnic group, Ma Baoqin started learning Panxiu, a type of embroidery with Tu characteristics, when she was about 10 years old.

Ma, 76, and her peers in Huzhu Tu autonomous county, Qinghai province, have decorated traditional garments for decades, but they have rarely seen any financial benefits from their skills.

Though she managed to sell some garments to tourists in 2005, becoming known as the first Tu woman in the county to make money from her embroidery skills, it didn't improve her family's financial situation.

Now, as the local government works to build a moderately prosperous society in all respects by promoting business development, the women's skills have helped generate an industry with annual revenue of millions of yuan, lifting many locals out of poverty.

"My family used to rely on farming to make a living. We never managed to make much money from it," said Ma, a provincial-level inheritor of Panxiu intangible cultural heritage.

Gaining its status as a national intangible cultural heritage in 2006, Panxiu, an art form unique to the Tu culture, dates back more than 1,000 years.

Ma never imagined she could make at least 30,000 yuan ($4,390) a year from her embroidery, which she only does as a leisure activity.

She is one of more than 140 women from her home village of Yaoma and nearby residential communities who work with a company in the village called Lansuoka Traditional Handicrafts. The company, which was established last year with local government help, concentrates on Panxiu.

Hu Lansuoka, the owner, said the company sold Panxiu products worth 170,000 yuan last year, and has earned more than 250,000 yuan so far this year.

Most of the younger women who work with the company can make over 3,000 yuan a month, while those age 60 and older can earn at least 1,400 yuan, though most have to combine embroidery with working on their farms and household chores, Hu said.

She added that most of the orders come from the county's cultural center.

"No matter how many products we make, the center will purchase them all," she said, noting that in October last year alone, the center bought goods worth more than 40,000 yuan.

The 38-year-old has also turned to the internet to boost sales. In 2017, at the suggestion of her 13-year-old son, Hu registered an account on Kuaishou, a short-video app, and began selling handcrafted goods on the platform.

"I have over 8,000 followers on Kuaishou and can sell products worth at least 10,000 yuan every month on the platform. Many of our items are very popular," she said.

Hu has been making efforts to innovate traditional embroidery styles and make new products. For example, a recent trial run of embroidered wall hangings featuring the 12 animals of the Chinese zodiac proved successful.

The hangings sell for 100 yuan each on Kuaishou and many of the women can make four a day, she said.

Ha Chengqing, an official with the cultural center, said there are 34 companies like Hu's in the county, jointly employing 5,000 women part time.

According to the Huzhu government, the annual output of the county's Panxiu industry is 100,000 items and sales revenue stands at 22 million yuan.

Some products are exported to 10 countries and regions.

Ha also heads one of the companies, a State-owned enterprise called Jinpanxiu, where 208 of the 635 female employees were formerly impoverished.

She said the women have to undergo a short training program, and are paid according to the number of pieces they complete per month. In addition to providing all the raw materials, the company is responsible for designing products and the sales strategy.

Last year, Huzhu invested 1 million yuan to innovate the Panxiu designs and provided training for about 1,000 people, the government said.

"I can now earn about as much as my daughter-in-law," said Lan Lamushijie as she made Panxiu items at a workshop in Banyan village.

Relocated by the local government from a mountainous area plagued by water shortages just four years ago, the 68-year-old never expected such big changes to her life.

"Every day, I had to get up at 3 am to collect water from the nearest source. It was daybreak when I reached home," she recalled, adding that it took about two hours to walk to the nearest township to buy daily necessities and the road could be made impassible by rain and snow.

Lan was one of 484 people from 129 households who moved to Banyan, located near the Yellow River, China's second-longest waterway, in 2016.

Before, her family of 10, including four children, depended on farming and raising livestock to make a living. The harsh conditions made it hard to earn much money, she said.

She makes Panxiu items in her free time, while her two sons and their wives have all found jobs near their new homes. The family can now save at least 20,000 to 30,000 yuan a year.

"We enjoy good roads now and it's convenient to go anywhere," she said. "Everything is good. I have no difficulties in my life and am in a good mood every day."

Every home is equipped with running water and natural gas. Meanwhile, the village runs a photovoltaic power generation project and solar panels have been installed on the roofs of the houses.

Excess electricity is sold to the State Grid Corp, which means that each family receives an average 2,500 yuan from the project every year, said Zhong Guanyinbao, Party chief of Banyan.

As a result of local government efforts to develop businesses, including Panxiu embroidery and tourism, the poverty headcount ratio fell from 14.1 percent in 2015 to 0.26 percent by the end of 2018.

Huzhu was removed from the national list of poverty-stricken counties in May last year, according to the county government.

Though Ma Baoqin's five children, including her three daughters, have found well-paid jobs near their homes, she is determined to continue making Panxiu goods.

"I want to promote this art form across the country," she said.