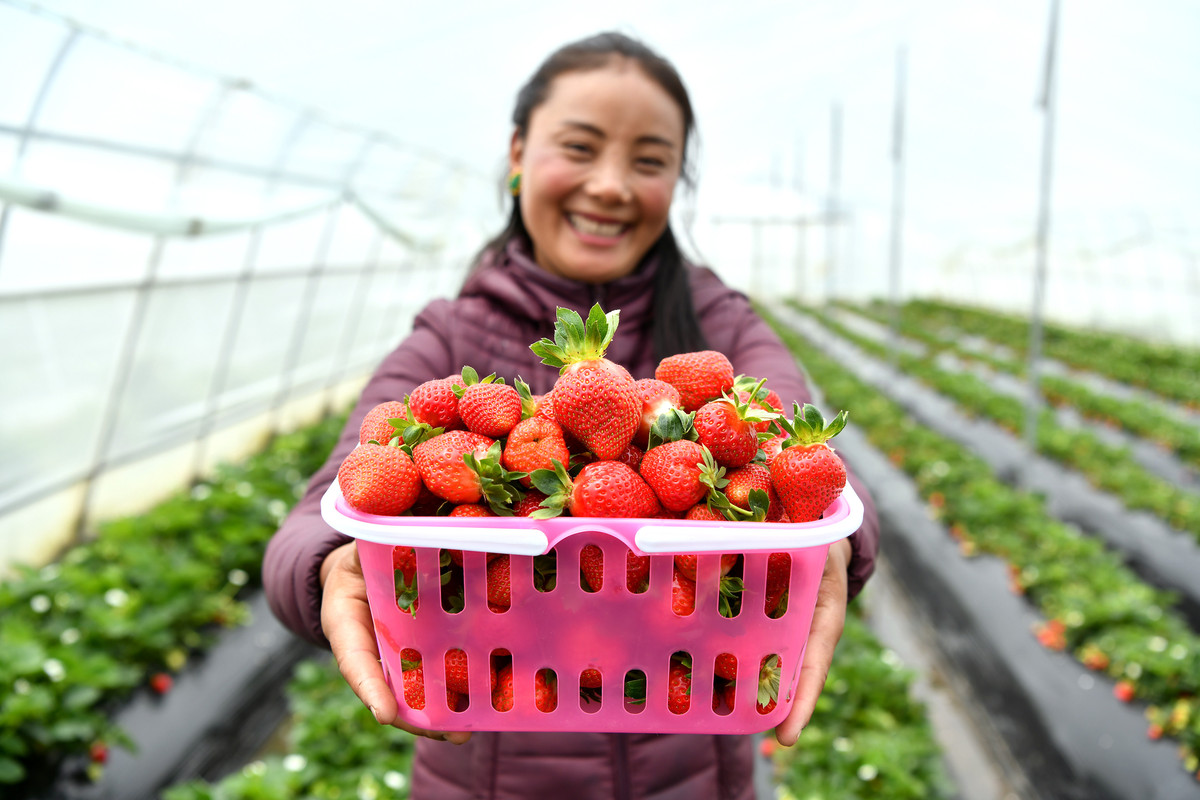 Chodron, a resident of Juphar village in Nyingchi, Tibet autonomous region, presents harvested strawberries grown in a greenhouse last year. The village is well-known in the area as the "Strawberry Village". LI XIN/XINHUA

Tobgyal and his fellow villagers have escaped poverty thanks to a strawberry growing cooperative in Juphar village, Nyingchi, Tibet autonomous region.

"Ten years ago, villagers here were so poor that many were unable to pay their electricity bills," said Tobgyal, who led villagers to take up strawberry growing in 2009.

"The cooperative sent people to other provinces to learn the planting technique and provided training from time to time."

The village now has 56 strawberry greenhouses, and its annual output of the fruit averages 28 metric tons. Strawberries are sold locally for about 40 yuan ($6) per kilogram.

Villagers have also started growing other fruits, including apples, pears and cherries.

Tourists visit the village in summer and buy the organic fruits.

"By engaging in industries such as strawberry growing, tourism and transportation, villagers saw their per capita disposable income increase to around 38,000 yuan in 2019, and now all the households have been equipped with showers, restrooms and water purifiers," Tobgyal said, explaining that villagers now enjoy a comfortable and prosperous life, much like city dwellers.

With an average elevation of 2,900 meters, Sergola village, which sits near the Yarlung Zangbo River in Nyingchi, has been operating a sheep cooperative.

Donbrup, who lives in Sergola, said the cooperative has more than 500 sheep and employs 173 people from 33 households. Each household earned an average of over 5,000 yuan a year between 2016 and last year.

Rongtse village, in Nyingchi's Nang county, has a yak cooperative.

The idea for that cooperative was raised years ago by Kalsang Chokar, the village's Party secretary. His enthusiasm was shared by other villagers after careful research and discussions, leading 80 village households to invest in more than 700 yaks in 2017.

"Each household did not have many yaks themselves. If villagers herded them individually, it would be a waste of grazing resources and human resources," Kalsang Chokar said. "Working as a collective, we are able to save costs and protect the environment."

Over the last two years, villagers have been benefiting from the cooperative through sales of yak milk, cheese, butter and hair.

"We believe in the long run, the cooperative will bring more profits to our villagers, and we can sell yak meat and produce more yak meat products," he said.

Official statistics show there is more poverty in Tibet than in any other provincial-level region, and it is the only such region listed among the country's toughest anti-poverty battlegrounds.

By the end of last year, all of Nyingchi's registered impoverished residents－23,893 people from 6,958 households－had escaped poverty.