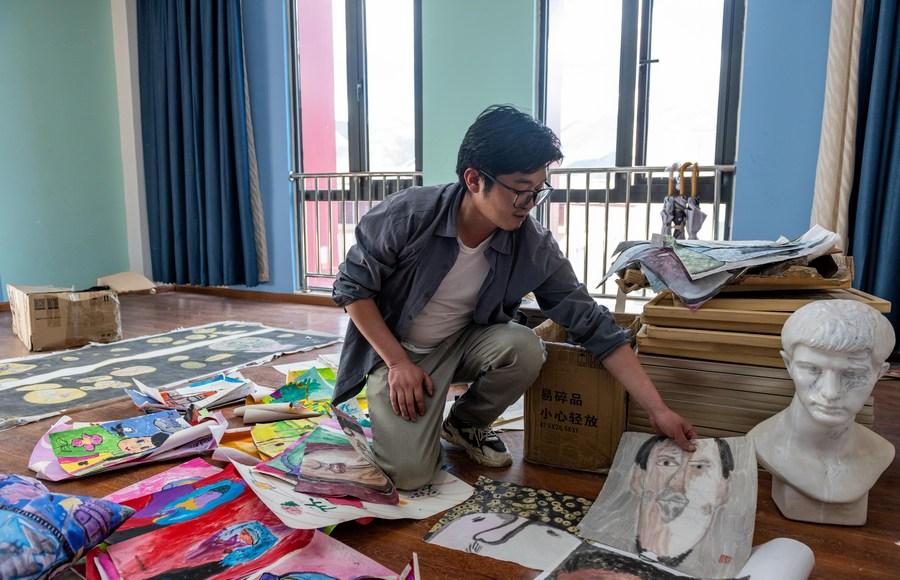 LHASA, Aug. 24 (Xinhua) -- On a beautiful pasture at a lakeside in southwest China's Tibet Autonomous Region, a group of students are painting the landscape under the guidance of their teacher.

Among them, fourth grader Sherab Tsomo holds in her hands her work which is painted with a gorgeous rainbow, under which two old and new Tibetan-style buildings feature a sharp contrast.

"I hope to major in fine arts like my teacher," she said.

The teacher that Sherab Tsomo talks about is Liu Yixiao, an art teacher at the regional youth and children's center, who volunteered to work in Tibet in 2013.

During his study in Xi'an Academy of Fine Arts in northwest China's Shaanxi Province, Liu went on a trip to Shangri-La, Diqing Tibetan Autonomous Prefecture of southwest China's Yunnan Province. After the trip, he decided to volunteer as a teacher in Tibet.

"The plateau scenery and the Tibetan people are what attracted me to Tibet," said Liu, now 34.

After having overcome the high-altitude sickness, he taught at the regional youth and children's center in the Doilungdeqen District of the regional capital Lhasa.

"At that time, the district was a less developed area on the outskirts of Lhasa. It took me more than half an hour to buy groceries," Liu said. "But I fell in love with the place, because the children here were so eager to learn to paint and I felt that I was needed here."

In 2017, Liu was sent to Zhentang Township in Dinggye County as an art teacher. Located at the foot of Qomolangma, the township is home to more than 2,600 Sherpa people. 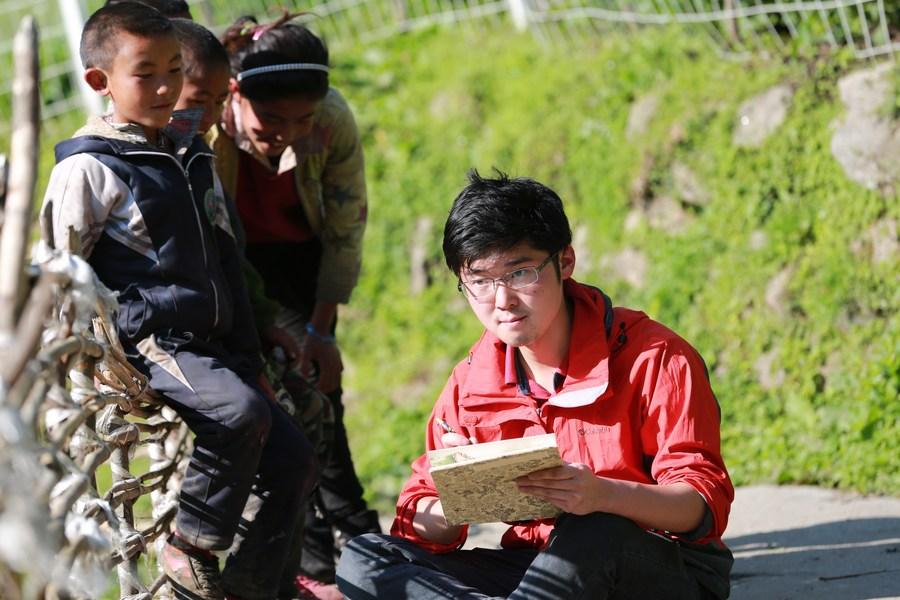 In Zhentang, Liu drew hundreds of sketches for the Sherpa people, and encouraged his students to pursue their own dreams.

To Liu's delight, Sidar, one of his students in Zhentang, contacted him last month. Sidar said, because of Liu, he has been inspired to take up photography and filmmaking.

"I'm glad that my students have dreams and dare to pursue their dreams," he said.

When Liu came back to the regional youth and children's center in 2018, he organized an art exhibition for his students. The works with unexpected colors and lines in the exhibition impressed many of the visitors.

Over the past few years, Liu has witnessed tall buildings, industrial clusters and shopping streets mushrooming around the youth and children's center, making his life much more convenient.

He also feels that Tibetan parents are putting more and more importance on their children's education.

"When I first arrived at the youth and children's center, I had only 10 students. Now, the number has jumped to 140," he said, adding that more exhibitions at various levels are held in Lhasa, showcasing an increasing number of children's works.

Liu said his students, inspired by the increasing number of modern high-rises around them, have presented such changes in their paintings.

"Now, I have to learn from my students their simple, free, and sometimes romantic expression in their works."