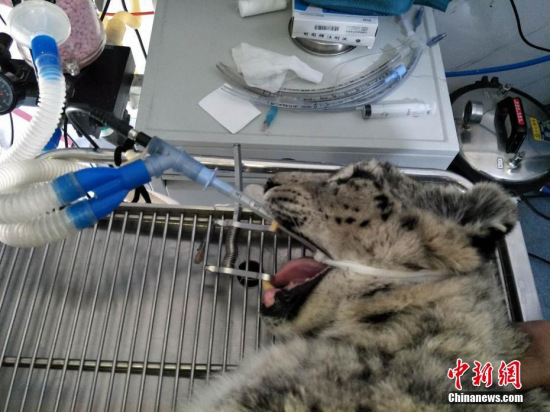 An injured female snow leopard received surgery on her fractured left hind-leg Monday, according to the provincial rescue and breeding center in northwest China's Qinghai Province.

The wild snow leopard, a species which is on China's top protection list, was rescued by four herders in Yushu Tibetan Autonomous Prefecture on Nov. 24. The feline was diagnosed with a fracture to the left hind-leg and other minor injuries which had healed prior to the surgery.

About 400 milliliters of liquid was removed from the injured limb, and 11 pins and a steel plate were implanted in the leg during the surgery, which took nearly four hours.

"We are relieved the leopard will have the possibility of standing again after the successful surgery," said Qi Xinzhang, deputy director of the provincial rescue and breeding center. "More importantly, we hope to raise public awareness of the rescue and protection of wild animals."

China is home to between 2,000 and 2,500 snow leopards, which roam across the provincial level regions of Xinjiang, Tibet, Qinghai, Gansu, Sichuan, Yunnan and Inner Mongolia. Both the population of snow leopards and their habitat area in China account for more than half of the global total.