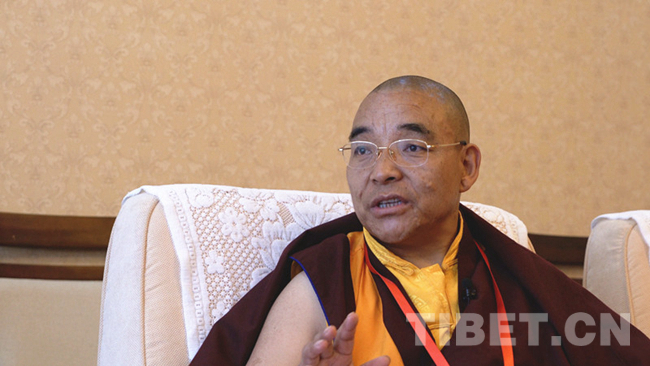 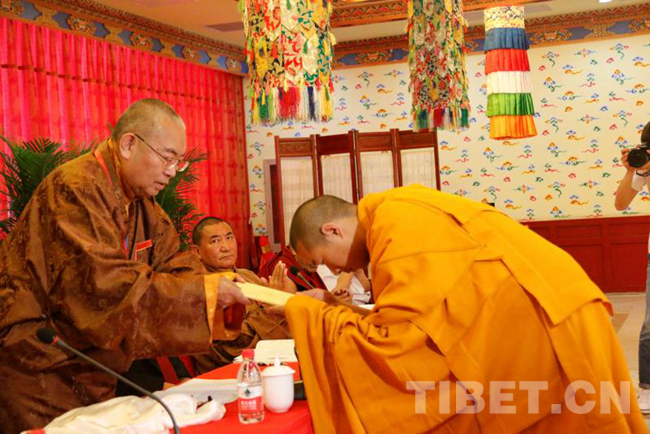 The 14th Tibetan Buddhism advanced title award ceremony is held in the High-level Tibetan Buddhism College of China on May 19. Dean Jamyang awarded certificates to monk students who had obtained the advanced ranking.

12 monks from the Gelug sect of Tibetan Buddhism who have obtained the advanced ranking take a group photo.

With regards to questions on the development of the three-level ranking system for Tibetan Buddhism and upholding the principle that religions in China must adapt to the Chinese society, reporters from China Tibet Online interviewed Bangden Dhunyu, vice president of the Tibet Branch of the Buddhist Association of China, president of the Shigatse Buddhist Association, and member of the fourth Tibetan Buddhism Academic Title Work Steering Committee.

"This year, there are monk students from the Gelug and Sakya sects graduating with the advanced title, and I participated in the entire process. These excellent students were selected to the High-level Tibetan Buddhism College of China by their local monasteries or provincial Buddhist associations, and they have worked very hard during the course of their studies, they themselves also said that they have learned a lot," Bangden Dhunyu said.

"One of the most important aspects is the study of the five great textual traditions. As Tibetan Buddhism uses both tantric and exoteric Buddhist practices, with equal importance paid to all the teachings of the Buddha. In this process, a monk first has to understand the theory of exoteric Buddhism. If one does not master the five great textual traditions, they certainly won't be able to learn the tantric practices and cannot call themselves a qualified monk. Therefore, students are very grateful for having such a good platform to learn and improve their practices."

14 years have passed since the establishment of the new Tibetan Buddhist title system, during which policies and regulations of the system have since formed a basic structure.

Speaking on the compilation of teaching materials for the three-level Tibetan Buddhism academic system, Bangden Dhunyu said, "Buddhism was founded in India and promoted in China. In its more than 2,500 history, there has never been a unified textbook. In compiling the teaching materials for the three-level system, the state has invested a lot of manpower, materials, and finances. The funds for these textbooks are allocated by the Central Government. This has never happened before in history. Since it involves compiling textbooks for the different sects of Tibetan Buddhism, nearly 100 high-ranking senior monks gathered to select and proofread materials. At present, 14 textbooks have been written for the public courses and eight sets of textbooks (total of 150 ones) for the professional courses, which are gradually being published. The response from the Tibetan Buddhist community to this has been very enthusiastic."

"Referring to the path to develop socialist culture with Chinese characteristics, it is said in the report to the 19th National Congress of the Communist Party of China (CPC) that we shall 'don't forget the original; assimilate the foreign; and face the future'. I believe that the development of Buddhism should also combine these ideas. We must first develop and pass down the excellent traditional cultures of the Chinese nation, assimilating advanced Buddhist culture from India and other places, and adhering to the principle that religions in China must be Chinese in orientation and adapt to the socialist society. For Tibetan Buddhism, we attach great importance to the interpretation of the doctrines. After returning to their hometowns, each of our graduates should continue their spiritual practice and apply what they have learned to promote social harmony and development. Buddha dharma does not depart from worldview. It is not enough to simply chant sutras but not integrate them with the society. The dharma must be integrated into life and work."

"After the 19th CPC National Congress, we were spreading the policies in Shigatse, Ngari, and Nagchu. Senior monks used language that the common people could understand to explain the state's policies, the stable development today, and the Buddhist culture. They were very willing to listen to. We hope to teach people to understand that faith is a kind of restraint, and it is also a kind of self-consciousness. There must be a minimum moral line, and people cannot do anything for the sake of immediate interests. There can be faith but not blind superstition. We must break evil and do good, and even if we cannot do good things, we must not do bad things. This is the bottom moral line, and it is good for the country, for nationalities, and for the society. This is how it combines a little bit with all aspects of people's lives and families."