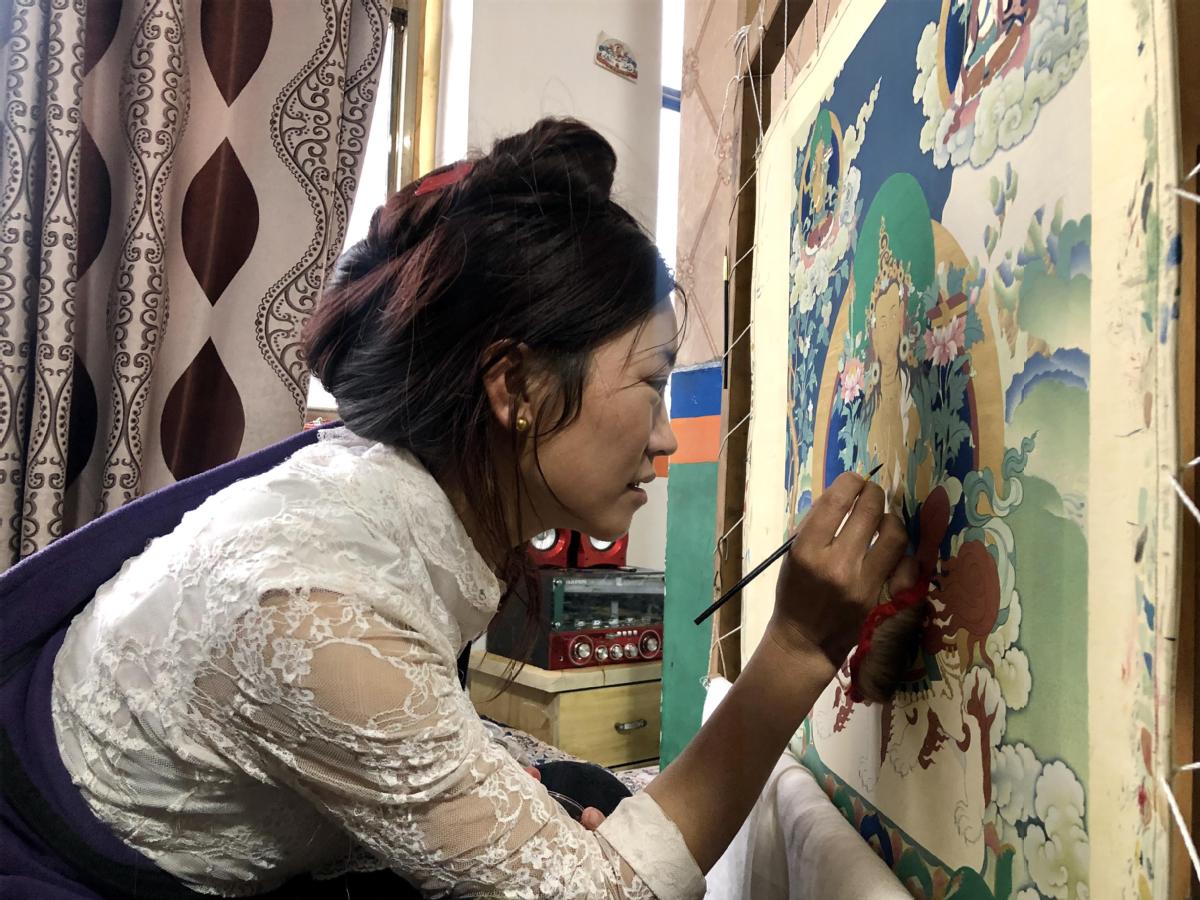 An artist works on a thangka at a cooperative in Gojo county, Tibet autonomous region. PALDEN NYIMA/CHINA DAILY

Thangka artists in Gojo county of the Tibet autonomous region are painting their way to prosperity by incorporating fresh design elements into the traditional art form.

The county, located in eastern Tibet, is a hub for traditional Tibetan art forms, such as thangka painting, pottery, calligraphy and coppersmiths.

Thangka artists in Gojo mainly practice the Mansar style of Tibetan thangka painting, which originated in the 17th century.

But what sets these artists apart from their counterparts in the rest of Tibet is that they have adapted their style of painting to incorporate and portray contemporary scenes and themes.

Last year, the top thangka artists from each of Gojo's painting cooperatives joined forces to create seven giant paintings, in a project backed by a 2.4 million yuan ($353,500) grant from the county's cultural bureau.

So far, these masters have produced works depicting China's 56 ethnic groups, as well as the experiences of people who have been lifted out of poverty and the nation's efforts to fight the COVID-19 pandemic.

Sherab Nyima, a thangka master and the founder of the county's Demar Art Heritage Cooperative, said he has painted thangka for more than 20 years and wanted to enrich the art form by incorporating modern elements.

"Traditionally, Tibetan artists paint thangka for the purposes of cultural preservation and to promote religion, but today they are more likely to take it up to make a living," said Sherab Nyima.

"We want to preserve this traditional art form and expand its market among tourists and businesspeople," Sherab Nyima said.

While most orders for thangka previously came from people belonging to the Tibetan ethnic group, he said that "people from all over the world" are now getting to know this traditional art form, which will greatly assist the efforts to preserve it.

Thangka painter Pema Namgyal, who has been practicing the art for 15 years, and whose wife is also a painter, said his family could make as much as 300,000 yuan per year thanks to orders from both home and abroad.

To help boost the income of more local residents, the county's cultural bureau is taking a number of measures, such as financial support and encouraging more people to take up this and other traditional Tibetan art forms.

Sonam Lhamo, the bureau's head, warned that the future of thangka painting had been at risk as fewer young people were taking it up.

"Some thangka masters only wanted to pass on their skills to members of their own family, which led to a sharp decrease in the number of artists," said Sonam Lhamo.

Another measure to redress the situation is that more women are being encouraged to take up thangka painting.

To sustain it and help it prosper, "a chain comprising education, inheritance, industry and poverty alleviation has been set up, and this model has brought new opportunities in terms of poverty alleviation and cultural preservation", said Sonam Lhamo.

"To help traditional forms of culture thrive such as thangka, tapestry and Tibetan incense, the local government offers vocational training to impoverished residents and unemployed people," she said.

To date, more than 200 people have been trained in the county, and they are engaged in thangka painting as far afield as Beijing, Sichuan province, and Lhasa, the capital of Tibet.

The county government has also set up a culture industry zone, involving investment of more than 10 million yuan.