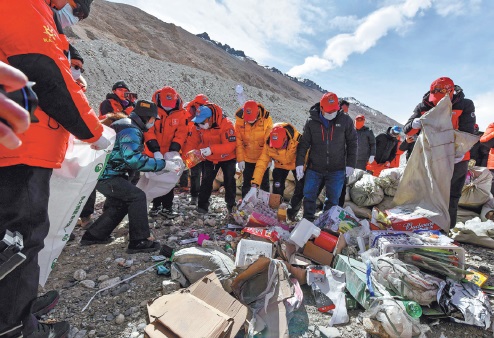 During a waste collection session in May at the base of Qomolangma, known in the West as Mount Everest, in the Tibet autonomous region, participants put garbage into bags and prepare to transport it downhill. JIGME DORJE/XINHUA

People in the region are calling for moves to tackle the growing issue of 'white pollution'. Li Lei, Daqiong and Palden Nyima report from Lhasa.

Dressed in camouflage and a blue vest, Samdrub squeezed a ragged, dusty blouse into a woven sack bulging with broken beer bottles, crushed biscuit tins, plastics and other garbage.

She dragged the sack to a blue truck parked a few hundred meters away. The truck stood near a single-lane road that led to a Buddhist temple sitting atop a mountain in a northern suburb of Lhasa, capital of the Tibet autonomous region.

Scores of similar sacks were piled up along the roadside, waiting to be loaded onto the vehicle. Not far away, a couple of sheep roamed the deserted land looking for grass.

"Loads of garbage here. Loads of it. This is the fifth consecutive time we have come here and we still haven't finished the cleanup," said Samdrub, 64, who like many Tibetans only uses one name.

The retired electrician was collecting trash on a patch of deserted land alongside scores of other volunteers on the hillside, which overlooks the Lhasa River, the northern tributary of the Yarlung Tsangpo River, in the south of the city.

Samdrub and her companions are members of a regular cleanup campaign organized by the Lhasa Ban-White Association, an environmental advocacy group established in October.

The association taps the volunteer spirit on the plateau to control abandoned plastic trash, aka "white pollution".

The volunteers are of all ages and come from different walks of life, but many of the most active are members of the Tibetan ethnic group who were born in the region's preindustrial era, when plastic was rarely used.

Now retired and with time to kill, Samdrub and her friends have taken to the city's ravines and riverbanks to battle pollution that is fueled in large part by urbanization and growing consumerism in the region.

"In recent years, I've read reports that livestock choked and died after eating plastic. I was born and raised in rural Shigatse (Tibet's second-largest city), and I know how big a financial loss that is for herders," Samdrub said.

Wangdu, a retired violinist with the Shigatse Art Troupe and a member of the cleanup crew, said he learned about the activity a few months ago via photos friends had shared on WeChat.

"I run a musical instrument shop in downtown Lhasa and I occasionally give myself a break by joining such activities. My children are very supportive," the 66-year-old said. 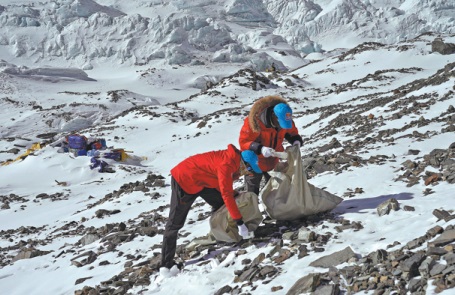 Volunteers collect waste at an altitude of 6,500 meters in Tibet in May. TASHI TSERING/XINHUA

The economic boom that enriched China's eastern regions over the past 30 years has expanded to Tibet and other inland regions.

That has fed urbanization along with the consumption of commodities and other waste-generating activities.

By the end of last year, Tibet's urban population totaled 1.07 million, nearly four times the 287,000 recorded in 1980, according to regional government data.

Lhasa's supermarket shelves carry nearly every item seen in their counterparts in Beijing. Mushrooming fashion brands such as Yishion and Bosideng have shortened the life span of the average Tibetan's wardrobe, while fast-food chains like McDonald's and KFC expand the use of disposable items in Lhasa.

According to ASKCI, a business consultancy, Tibet's residents received 3.2 million packages in 2012, while the number more than doubled in 2016 to 7.3 million.

The Tibet branch of the State-run China Post said its delivery personnel each delivered an average 200 packages every day in November, when the "Double 11" shopping carnival－initiated by e-commerce giant Alibaba－was held.

Though some big cities have been experimenting with ways of recycling cardboard boxes and other packing materials, most wrapping in China goes into trash cans unsorted.

Tersing Dorji, 62, a member of the Lhasa Ban-White Association, said the worst pollution results from rural farmers' markets and the common use of plastic bags, which are super-thin and relatively expensive to recycle.

"They are of various colors and very light, and when the wind blows they fly everywhere," she said.

In a landmark ruling in 2007, the central government banned the production of super-thin plastics nationwide and ordered retailers to charge customers a fee if they wanted a regular plastic bag.

The move followed a similar rule implemented by authorities in Lhasa two years earlier, which made Tibet's capital a front-runner in controlling single-use items. The ban was extended to the entire region in 2010.

The bans have worked well in supermarkets and other large operations, where additional charges for plastic bags have prompted many shoppers to opt for reusable items, such as cloth bags.

However, in rural areas where farmers' markets are abundant and law enforcement is less stringent, the feedback has been barely satisfactory, according to local officials and environmental activists.

Cai Jinping, co-founder of the Lhasa Ban-White Association and owner of a factory that makes reusable bags and other environmentally friendly products, said vegetables are extremely cheap so it proved impractical to ask farmers to pay extra for a bag while shopping for a few potatoes.

"Charging for bags would drive rural customers away and vendors would lack incentives to abide by the rules," he said.

The demand for cheap, super-thin plastics, coupled with lax law enforcement in rural areas, has emboldened factories to produce the bags and also prompted shop owners to offer them for free.

According to an estimate by the association, Lhasa's 16 farmers' markets use 216,000 bags every day, which amounts to 272 metric tons of plastic a year.

She said even though almost a decade had passed since Tibet adopted the plastics ban, some small businesses were still trying to evade inspections, which exacerbated pollution. To improve recycling rates, she called for greater efforts to raise awareness of plastic pollution and said the topic should be included in Tibet's compulsory education curriculum.

Adding white pollution to the school curriculum and stepping up recycling would be complex and time-consuming, but before that happens the association plans to introduce incentives for rural buyers to employ reusable cloth bags rather than plastics.

Cai said he is planning to roll out a program in Lhasa's markets that will allow shoppers to trade 20 plastic bags for a cloth bag, and in the meantime he will lecture about the harm plastics do to farmland and livestock.

The production of cloth bags, which cost about 1 yuan (14 cents) each to make, is likely to be financed by companies who want to use them as advertising space.

"It is hoped that rural people will bring the cloth bags with them the next time they shop at farmers' markets," Cai said. 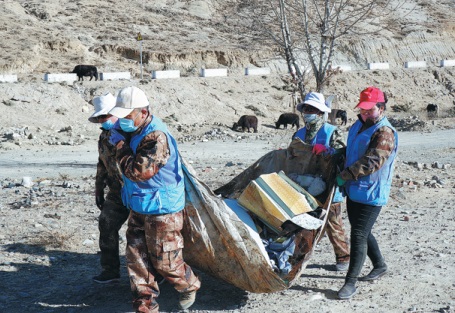 Members of the Lhasa Ban-White Association haul trash to a truck for transportation. LI LEI/CHINA DAILY