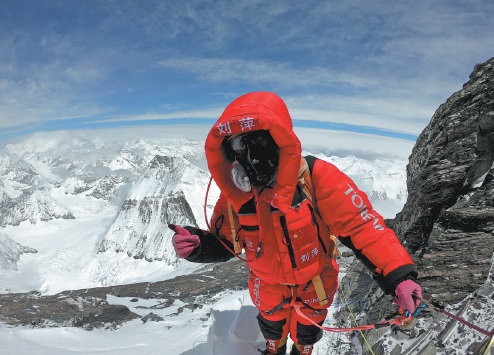 Liu Ping poses on her way to a base camp at Qomolangma rising 8,300 meters above sea level on May 27. CHINA DAILY

On her way to the top of Qomolangma, Liu Ping made herself a cup of tea. She boiled water from the snow around her, poured it into a cup full of the famous biluochun green tea she brought from home, and enjoyed it on the roof of the world.

"Life is about experiencing different things and appreciating the beauty of the world," said the 40-year-old Liu, who successfully reached the summit of Qomolangma－known as Mount Everest in the West－from the north side in May.

Liu became obsessed with mountaineering seven years ago. She started to climb the mountains around Jiangsu province's Suzhou－her residence, about 4,100 kilometers from the Tibet autonomous region－in 2013 before setting off for adventures across China and the world.

In 2014, she trekked some remote areas of Tibet that were full of magnificent natural scenery and friendly strangers. She encountered many travelers who offered to share their food and stories with her.

At one spot some 5,600 meters above sea level, an old couple in their 70s greatly impressed Liu.

"They were happy, energetic and in good shape," she said. "That's what I want to look like when I grow old."

Climbing mountains in Tibet can be a hazardous undertaking. During the trip, she also met a young man who developed urinary tract problems and had to abandon the trip to receive treatment.

To prepare for mountaineering, Liu has been jogging almost every morning for many years. She reached the top of Qomolangma from the south side in Nepal last May and went to Tibet in April 2020, leaving herself enough time to prepare for the ascent on the north side.

Before the adventure started, she had to sign a contract with the company organizing the trip. The nine-page contract elaborated all the risks the climbers might experience and stated that all risks must be borne by climbers.

During training to climb the world's highest peak, Liu learned to prepare for altitude sickness, blisters and despair due to brutal weather.

"Some people say that the weather on Qomolangma changes in seconds, Unfortunately, the climbers have to wait for an ideal 'window period' before attempting to reach the summit," she said.

On May 21, together with other 14 climbers, Liu officially began her ascent from the north side. They reached a base 5,600 meters above sea level that night. Liu kept telling herself to calm down, keep pace and breathe regularly.

On May 25, the team arrived at a base camp at 7,028 meters, and made it to another base at 7,790 meters the following day. On May 27, they arrived at the last base, which was 8,300 meters above sea level, before attempting to reach the summit.

At 2:00 am on May 28, the team set off to make a run for the summit, which soars to 8,848 meters. The lights attached to their heads gave off a faint glow on the endless snowpack and the floating flakes in the air. They held tight to the guide rope and slowly ascended in almost complete darkness.

Liu admitted she felt afraid and had respect for nature and life during the nearly nine hours of the final ascent. Her fear was exasperated by the fact that as she made her way up a frozen cliff with trembling legs and knees, she saw the corpses of many unsuccessful climbers below frozen in silence.

"Some people quit and failed in the last stage. I was not as excited as I imagined when I stood at the top of the world. Actually, I felt afraid because I was at the border between life and death minutes earlier. The thing I wanted to do most was call my mother and tell her I was safe."

Though worried, Liu's mother always has an open mind and does not ask her to give up mountaineering. She only feels relaxed when she sees Liu's updates on WeChat. But sometimes she loses contact with her daughter when the latter is in extremely remote areas.

It cost her 550,000 yuan ($77,735) to reach the top of Qomolangma, including money paid for guides, equipment and transportation from Suzhou to Tibet.

Working for an insurance company, Liu has to make time for her travels during annual leaves. She has already set herself the next goal－to experience the North Pole in 2021.

"Everyone has their own way to go and their own life to experience," Liu said. "Climbing the summit of Qomolangma makes me cherish life more and reflect on my life. I enjoy challenging myself, and every woman should try what she thinks is impossible."

Xiang Mengshi contributed to this story.