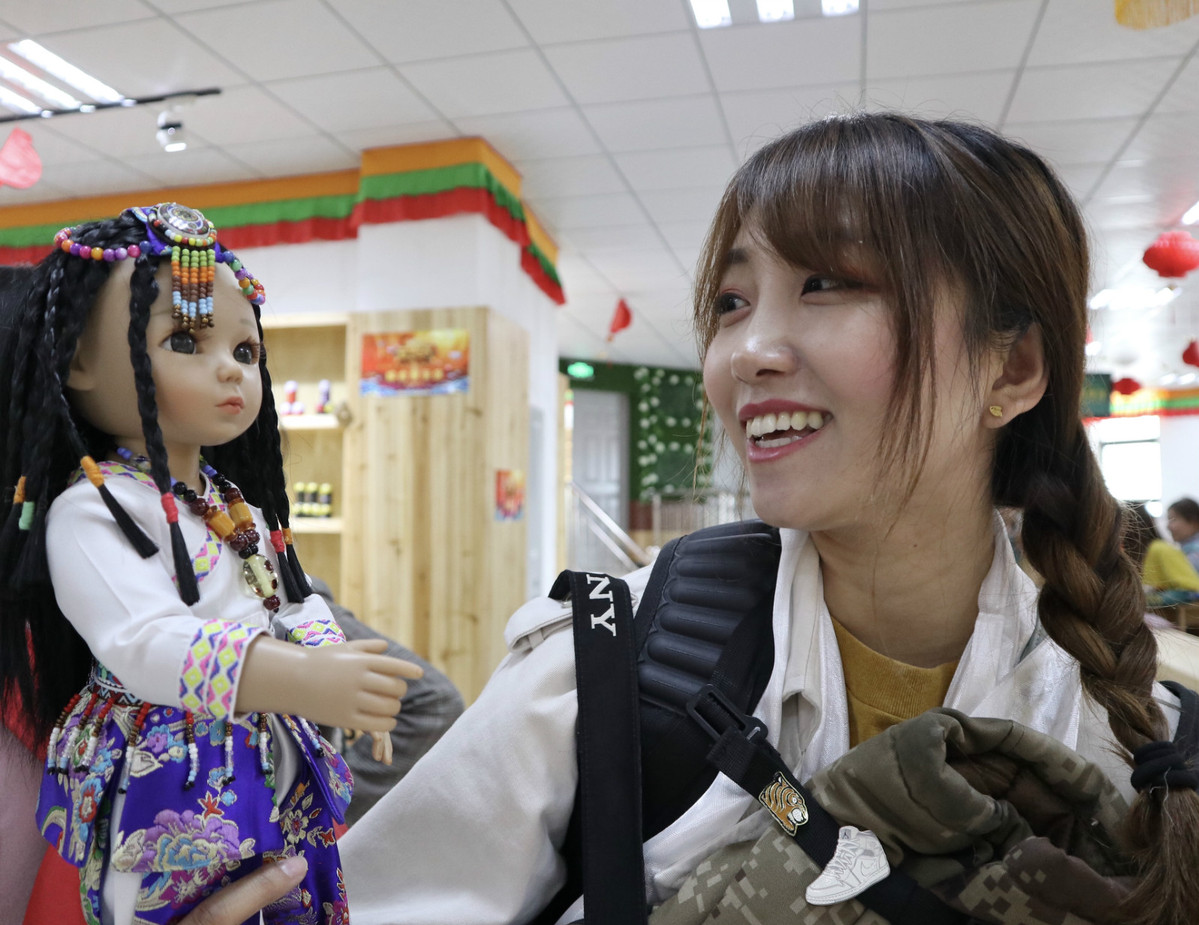 A tourist poses for a photo with a doll in the Drayerpa Tourism Service Center in Tibet's Dagze district on July 8, 2019. [Photo by Palden Nyima/chinadaily.com.cn]

Chodron, a 45-year-old farmer in Dagze district of Lhasa in the Tibet autonomous region, has been quite busy lately.

After reaping the highland barley in her field, she headed toward a local cooperative to make traditional handicrafts, where she picked up a second occupation as a sewer.

"In the past, I simply stayed at home doing nothing after the harvest was finished. But recently, everyone in the cooperative started working long hours because we received a large order for school uniforms," Chodron said.

The cooperative, established in late 2012, has attracted another 26 local farmers and herdsmen like Chodron, providing a stable job for them and bringing extra monthly income, ranging from 2,800 yuan ($394) to 6,000 yuan.

According to Zhang Gan, the Party chief of Dagze district, poverty alleviation industries adapted to local conditions have stimulated farmers and herdsmen to increase their income over the past three years.

"In the first half of 2019, the per capita disposable income of our rural residents reached 4,623 yuan, among which over 75 percent were from non-farming jobs, a much larger proportion than before," he said.

Once a hard nut to crack among the deeply impoverished areas in China, Tibet has now found its own path to getting rid of poverty.

Besides developing industries with special characteristics on the plateau, such as raising yaks and making traditional Tibetan handicrafts, Tibet has also provided skill training to local farmers and herdsmen and found new jobs for them.

In the first half of 2019, the per capita disposable income of rural residents in Tibet reached 4,009 yuan, a year-on-year increase of 12.5 percent, ranking first in China. Construction of infrastructure projects in the region have provided jobs for 193,000 farmers and herdsmen in the first half, boosting their incomes considerably.

At present, the incidence of poverty in Tibet has dropped to below 6 percent. The autonomous region aims to increase rural residents' disposable income by 13 percent by the end of this year, lift all 150,000 people living below the poverty line out of poverty, and help 19 impoverished counties shake off poverty.