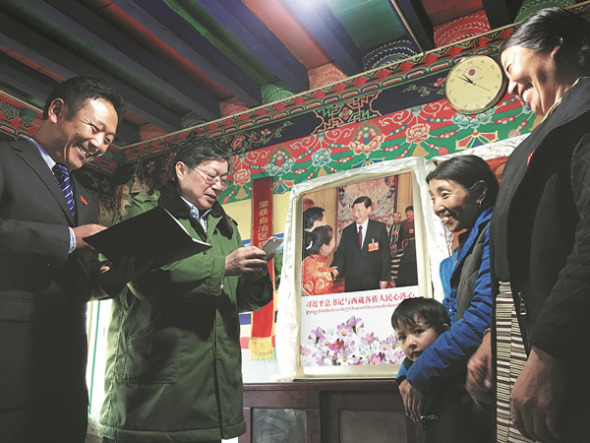 Tibetan sisters Yangzom (first right) and Zhoigarlisten to two government officials relaying an answer from President Xi Jinping to a letter the sisters wrote to him. The sisters live in Yumai in Lhunze county along the Himalayas' foothills. (CHANG CHUAN / FOR CHINA DAILY)

President Xi Jinping encouraged a herding family in the Tibet autonomous region to put down roots in the border area, safeguard Chinese territory and develop their hometown.

Xi, also general secretary of the Central Committee of the Communist Party of China and chairman of the Central Military Commission, made the remarks in a reply delivered on Saturday to Zhoigar and Yangzom - two Tibetan sisters in the township of Yumai in Lhunze county, which sits at the southern foot of the Himalayas.

The two sisters wrote a letter to Xi during the 19th National Congress of the CPC, which ended last week, to report their experiences in safeguarding the country's territory and introducing development and changes in their town, while pledging to make continuous efforts to protect the border. Among their activities is keeping an eye out along the border and reporting suspicious activities like possible smugglers.

Xi, in his letter, praised the family's safeguarding national territory for two consecutive generations, thanked those who made loyal contributions to safeguarding and strengthening the country's borders, and encouraged the herders to build their hometown into a beautiful one.

There used to be only one family, consisting of the two sisters and their father, in the remote location. The town now has 32 residents in nine families. It's the country's least populous town. Steep slopes and rugged paths make it difficult to access.

"Without peace in the territory, there will be no peaceful lives for millions of families," Xi wrote.

He said he hoped the family would motivate more herders to put down roots in the border area "like galsang flowers", and become guardians of Chinese territory and builders of a happy hometown.

Fresh from the 19th CPC National Congress, Xi told the family that the Party would continue to lead people of all ethnic groups toward better lives.