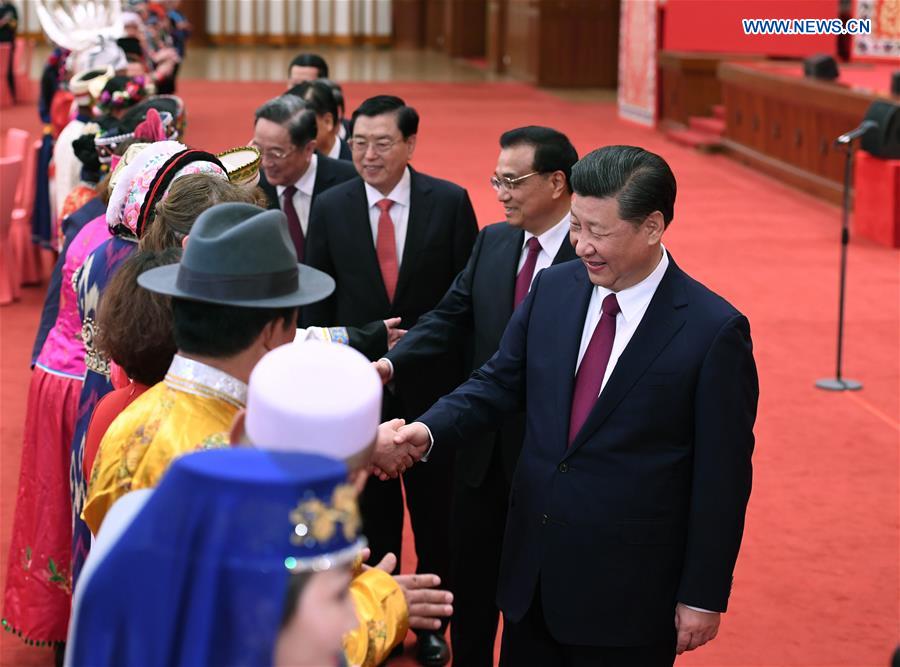 Top Communist Party of China and state leaders Xi Jinping, Li Keqiang, Zhang Dejiang, Yu Zhengsheng, Liu Yunshan, Wang Qishan and Zhang Gaoli attend a gathering with ethnic minority deputies to the 12th National People's Congress (NPC) and ethnic minority members of the 12th National Committee of the Chinese People's Political Consultative Conference (CPPCC) on the sidelines of the ongoing annual sessions of the NPC and the CPPCC National Committee at the Great Hall of the People in Beijing, capital of China, March 11, 2017. [Photo/Xinhua]

Xi, also general secretary of the Communist Party of China (CPC) Central Committee and chairman of the Central Military Commission, along with other Party and state leaders, arrived at the banquet hall of the Great Hall of the People at 7:45 p.m. to the enthusiastic applause from the lawmakers and political advisors in ethnic costumes.

"Good evening, general secretary!" Gesang Zhoigar, a deputy to the National People's Congress (NPC) from Tibet sitting next to Xi, greeted him warmly.

Xi was pleased to learn about improved life in her village, where big changes in education, medical services, elderly care and housing have taken place.

He asked her to convey his regards to the villagers, wishing them an even better life.

After being briefed by a deputy from Xinjiang Uygur Autonomous Region on local development, Xi told him to make solid efforts for ethnic unity and lead people in pursuing a well-off life.

Other leaders, including Li Keqiang, Zhang Dejiang, Yu Zhengsheng, Liu Yunshan, Wang Qishan and Zhang Gaoli, all members of the Standing Committee of the Political Bureau of the CPC Central Committee, also attended the gathering.

They had cordial conversations with the lawmakers and advisors, encouraging them to contribute to the Chinese nation's rejuvenation.

The gathering was chaired by Qiangba Puncog, vice chairman of the NPC Standing Committee.

"We must closely unite around the CPC Central Committee with Comrade Xi Jinping as the core," Sun said, calling for joint efforts to build a community of shared future for the Chinese nation.