As the curtain rises, the backdrop of the Potala Palace under an azure sky emerges before the audience, and an excerpt from Tashi Delek, one of the eight great Tibetan operas, is performed while cymbal drums are played on a campus stage in China’s Taiwan on Sept. 26. 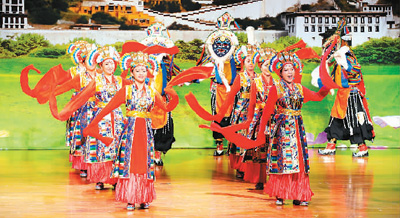 This is just one of the shows from the "Tibetan Culture Promotion on College Campuses in Taiwan"event, the first large-scale introduction of Tibetan culture to Taiwan’s college campuses, which is co-sponsored by the Chinese Cultural Friendship Association, the Culture Department of southwest China’s Tibet Autonomous Region, and the Association of Arts and Literature Centers of Taiwan Colleges.

At the same time, the Tashi Delek opera was also performed at the university on the same day followed by two other performances at National Taiwan University of Arts on Sept. 24 and the National Chiao Tung University on Sept.26.

This was the first time Tibetan opera, which is included on the representative list of the intangible cultural heritage of humanity, had been performed in Taiwan.

Bangdeng Wanggyur, head of the Tibetan opera troupe, said that they selected the most exciting excerpts of the eight major Tibetan operas, compiling an hour-long program that opened with the traditional opera Wenbadon and concluded with "Wedding"  from Princess Wencheng.

Xie Qiongzhen, a teacher retiring from the National Chiao Tung University in Taiwan said that although she does not understand Tibetan language, the Chinese subtitles on either side of the stage helped her understand the general content, which was"quite a novel experience.”

Lee, a postgraduate student studying applied arts at the National Chiao Tung University in Taiwan, said that they don’t often get to see Tibetan performances in Taiwan, and he thought the performances were very interesting. "We've never seen some of the instruments and dance steps here in Taiwan."

Second-year postgraduate student Zhang who majors in music paid special attention to the instruments used in Tibetan opera. He felt that Tibetan opera’s percussion instruments, such as the cymbals and drums, were somewhat similar to the dragon and lion dances in Taiwan, in that "the sound is the same, but the rhythm is different." He also felt that some of the movements were a bit like those in Gezi opera of Taiwan, "for example, when watching the movement for riding a horse, we could generally understand what they were doing."

81-year-old Mr. Fan Guangdi returned to live in Taiwan after retiring from working in the United States. He said he does not often go out, but"yesterday I heard that there would be a Tibetan opera performance, so I said I wanted to come."

He thinks that the performance was wonderful, reminding him of the experience when he went to Tibet more than 40 years ago.

Bangdeng Wanggyur admits that they were initially worried the Taiwan audience would not appreciate Tibetan opera. But after one performance after another, he became more and more confident.

"When we performed at National Taiwan University of Arts, during the finale of 'Wedding' from Princess Wencheng, the audience gave us a standing ovation."