Pasang Drolma, 46, works on a farm near Duishigagyi, a newly built village in Chushul county. The farm is part of the government-backed Pure Land project. (Photo by HOU LIQIANG/CHINA DAILY)

Residents in remote villages relocate to new settlements with modern housing and jobs.

Shopping for daily necessities used to be a luxury for Pasang Drolma. The nearest store was in a town 30 kilometers away, and she only had the time to make the journey twice a year.

As no public buses ran though her isolated village in the Tibet autonomous region, to get there she would have to wait beside a dirt road for up to an hour to flag down a private minibus or taxi service.

That was until the end of last year, however, before the 46-year-old mother moved to Duishigagyi, a new village in Chushul county built specially to give impoverished families a fresh start.

So far, 365 households－roughly 1,700 people－have been resettled in the area as part of an ongoing poverty alleviation program. Residents enjoy convenient public transportation links, and "now we live in a spacious and much more comfortable new house", Pasang Drolma said.

Pure Land, a regional government-sponsored agricultural project nearby, has also provided a range of employment opportunities.

Due to unfavorable weather and soil conditions in their old village, Pasang Drolma and her husband had barely been able to grow enough grain to feed themselves. The family's only income was the 7,000 yuan ($1,070) a year their eldest son made working as a restaurant waiter in Lhasa, the regional capital.

Pasang Drolma and her youngest son now earn 100 yuan a day doing farmwork at Pure Land. "We don't have to work every day, we just work when we want," she said. "We made more than 10,000 yuan in the first half of this year."

Drolma, 53, spends time with her daughter and grandchildren at home. (Photo by HOU LIQIANG/CHINA DAILY)

"The industry was brought in before people were relocated to the area," said Sonam Yangkyi, a village cadre in Duishigagyi. "All the resettled families have at least one person who can work, so they benefit from the industry."

China's growing demand for organic products and traditional Tibetan medicine has proved good news for the agricultural project, which is in a clean, high-altitude environment.

"One kilogram of ordinary peaches only sells for about 30 yuan, but a single peach from the Pure Land zone can sell for 100 yuan," Sonam Yangkyi said.

Last year, the project created 127,500 jobs and increased the per capita income in Duishigagyi by about 6,000 yuan, according to the village committee, which did not provide the actual income figure. It added that the 89 enterprises with operations in the zone had a combined output of 3.7 billion yuan.

Duishigagyi was one of 353 new settlements built in Tibet last year to relocate 77,000 people from isolated areas, with most next to industrial developments to ensure abundant job opportunities, according to Lu Huadong, deputy director of the Tibet Poverty Alleviation Office.

A further 450 new villages with room for 163,000 people were also planned this year, as the region looks to build a comprehensively well-off society by 2020, he added. 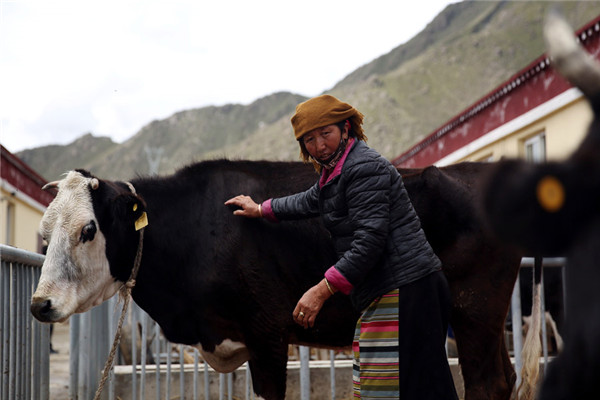 Drolma works on a cattle farm near her new home in Sumdan village. (Photo by HOU LIQIANG/CHINA DAILY)

Most of the people being resettled live in high, cold areas with limited resources, a fragile ecology and a severe prevalence of Kaschin-Beck disease, a chronic bone condition. Relocation is usually the only way to escape poverty.

Tibet had about 590,000 people classified as rural poor by the end of 2015, and about 150,000 were lifted out of poverty last year, according to official data. "It's a key period for the war against poverty this year," Lu said. "We will continue mapping out policies in line with the varying local situations as well as increase funding."

Moving to a new settlement is voluntary, he said, although the major changes seen in the lives of those already in new homes has helped in the government's work to motivate people to relocate.

Drolma, 53, who used to live in the same remote village as Pasang Drolma, chose to move with her family to the newly built Sumdan village in July last year.

She and her daughter had been unemployed, but almost instantly after relocating they found jobs. Drolma now works at a cattle farm, while her daughter is a child care worker at a kindergarten. Together, they earn more than 5,000 yuan a month.

The family's new home has had a steady stream of visitors, with friends and relatives keen to see the place, Drolma said.

"Some of them stay for days and don't want to leave," she said. "They say they admire me very much and that I made the right decision to move." 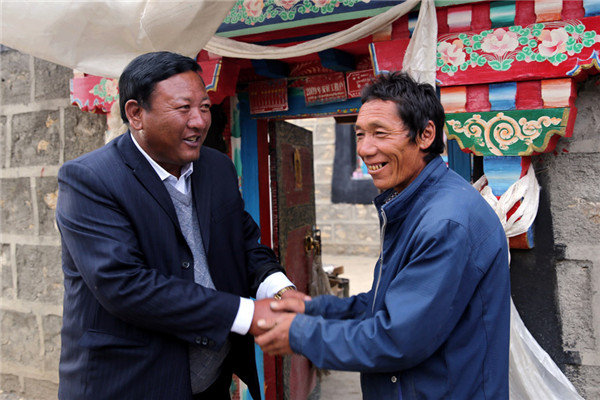 An old Chinese saying goes, "When you drink from the well, don't forget the people who dug it." It is a philosophy fully embraced by Badro, a rags-to-riches businessman and philanthropist.

Born to a poor family in the Tibet autonomous region's Lhunze county, by age 18, Badro was a high school dropout working as a laborer, making the equivalent of only 15 US cents a day.

"I lived in a shelter I'd made from plastic sheeting. Sometimes, it was so cold at night I couldn't fall asleep, so I'd work at night and sleep during the day," he said, adding some days he worked 20 hours without food.

Five years later, while working at a building site in his hometown, he learned that the regional government was encouraging locals to bid for low-cost construction projects.

Badro started a construction company and won the bidding for several projects. However, in 2003, the company experienced funding problems and was saved from bankruptcy by a local government loan, which allowed him to pay his employees.

It proved a turning point. The businessman has since opened a vegetable farm, dairy farm, hotel and wholesalers, creating hundreds of jobs.

"I will never forget the help I received from the Party and the local government," said Badro, now 50, who added that the assistance back then inspired him later to contribute to the nation's poverty alleviation efforts.

More than 160 of his 700 employees are from impoverished backgrounds, he said. Moreover, he has invested about 8 million yuan ($1.22 million) to build homes for about 60 families, while he also donates 500,000 to 600,000 yuan a year to help poor students cover the cost of their studies.

Norbu Gradul from Zagor village is among the people Badro has helped. His family of four used to live in a stone-and-mud house with sunken foundations and a leaking roof. The millionaire entrepreneur built them a new home last year at a cost of 120,000 yuan. "I didn't spend even a penny on the new house," Norbu Gradul said.

The 46-year-old villager works on Badro's vegetable farm and makes 2,500 yuan a month. His wife, who works for the local government as a part-time forest ranger, earns 3,000 yuan a year. "Badro treats me even better than my parents," he added.

The walls of Badro's office and adjoining 50-square-meter conference room are covered with dozens of thank-you messages sent by people he has helped. Yet he said he has not finished.

"I want to create more job opportunities for the poor and give more back to society," he said. 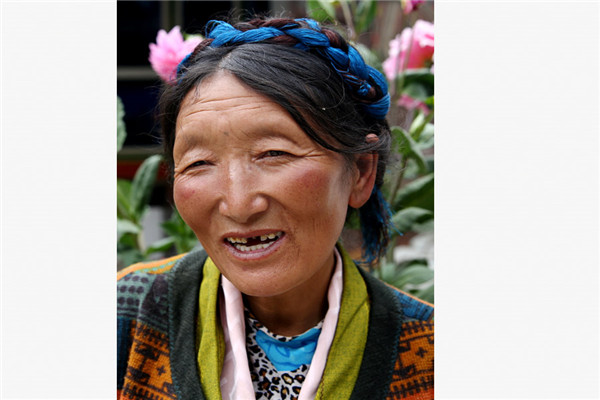 Tsamjo Drolma's family of four was registered as impoverished last year by the Lhunze county government in the Tibet autonomous region. The 49-year-old mother explained to China Daily some of the subsidies her family receives as a result. (Photo/China Daily)

・ About 700 yuan to maintain their more than 34 hectares of grassland.

・ 3,000 yuan each for Tsamjo Drolma and her husband for their work as forest rangers, a job reserved for impoverished families.

・ 80 percent of the 3,800 yuan annual tuition fee paid for the couple's eldest son, who graduated from a college in Tibet this year.

・ 8,000 yuan a year to cover their youngest son's college expenses, including the 6,000 yuan annual tuition fee. He was accepted at a college in Tianjin last year.

・ 15,000 yuan to repair damage to their home caused by an earthquake last year.

・ A 70 percent refund on any medical costs incurred at hospitals in Lhunze.

・ About 300 yuan each time a cadre visits, which is about three times a year.