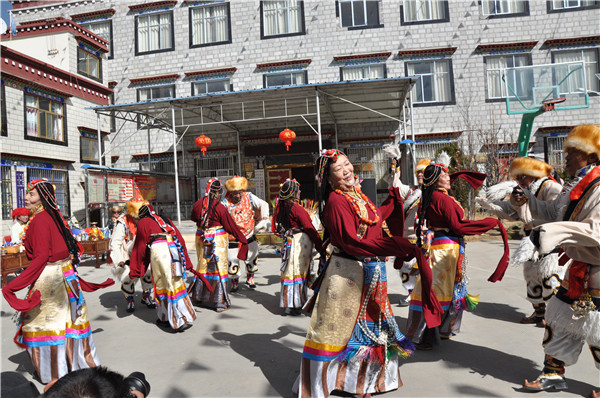 On Monday, as a group of elderly performers danced and sang, members of the Abalin community in Lhasa, capital of the Tibet autonomous region, rang in the Tibetan New Year.

Also known as losar, the new year celebrations are held from the first to the fifteenth day of the first lunar month in the Tibetan calendar, with the first three days being specially important.

"We woke up early to prepare for the performance," said Detsing, one of the members of the Senior Citizens' Performing Team.

Like in Abalin, communities in other urban and rural areas of Tibet have been celebratinglosar, among the most important local festivals, with cultural activities over the past two days.

"We must dress in traditional costumes to celebrate the festival. It's also a way to show our respect to other people," explained Detsing, a 67-year-old retired worker from the Abalin community.

Detsing and her troupe have been celebrating the festival with performances for the community for over a decade.

The group, which has since grown from about 10 to more than 50 members, had previously also performed in other parts of Lhasa during the festival.

"Earlier, there was little entertainment for us senior people. But now that we have established the performance group with the help of the community management committee, we can both improve our own health and help local residents have some fun," Detsing said.

Besides such performances, members of the Abalin community also carry homemade wine made from qingke (a kind of highland barley) to greet neighbors and relatives.

The hosts prepare traditional dishes at home for their guests and welcome ceremonies are held at the main door of a house. 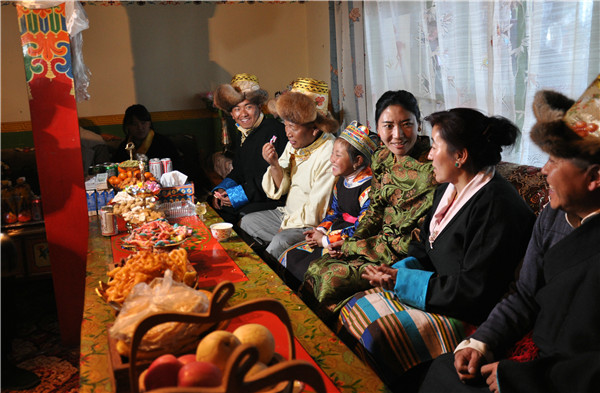 "We don't close our doors on the first day of the Tibetan New Year. Visitors can come in at any time," she said.

In the rural areas, traditional celebrations have been preserved, too.

Dorje, a 27-year-old woman from Sanyou village in the Qushui county of Lhasa, woke up early on Monday to fetch water from a nearby river until her large bucket at home was full.

"It's a Tibetan tradition. We believe it will bring good luck to the family the whole year," she said.

Dorje and her neighbors have decorated their homes with traditional items and have prepared snacks, fruit trays and dried yak-meat dishes.

Sometimes, auspicious patterns are drawn on the ground in front of the gate to drive away bad fortune. Homemade butter tea and qingke wine are necessary drinks for guests in every family during the festival.

Losar is also a time for family reunions. On the eve of the new year, which is called gutor, families usually have a feast together. A kind of dumpling called guthuk, filled with different ingredients such as meat, cheese, wheat and sweet potato, is always served with the other dishes.