Chinese Ambassador to Nepal Wu Chuntai speaks at a ceremony in celebration of the Chinese Tibetan Losar, or New Year, in Kathmandu Feb. 12, 2015. (Xinhua/Sunil Sharma) 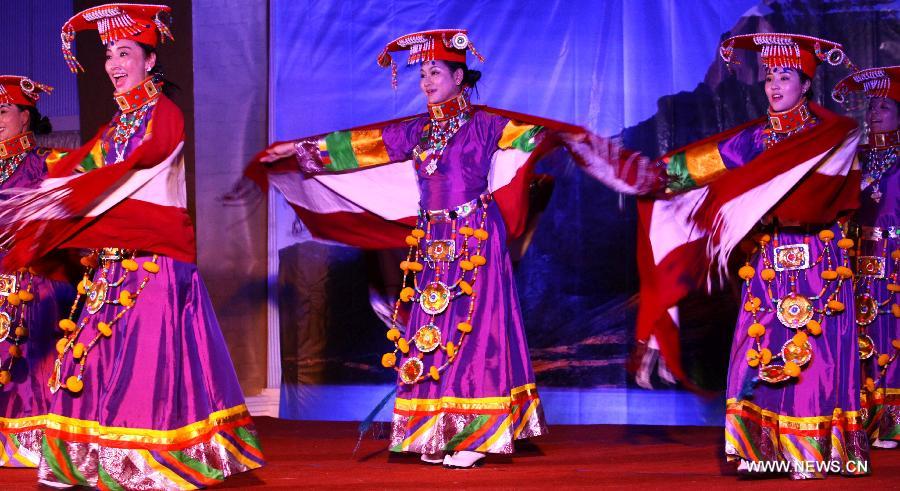 Performers dressed in traditional attire dance during a ceremony in celebration of the Chinese Tibetan Losar, or New Year, in Kathmandu Feb. 12, 2015. (Xinhua/Sunil Sharma)

The Chinese Tibetan Losar, or New Year, has been marked in the Nepalese Capital City Kathmandu on Thursday evening.

The Chinese embassy in Kathmandu hosted a special function in celebration of the Chinese Tibetan Losar.

Chinese ambassador to Nepal Yu Hong inaugurated the cultural show where a group of artists from China performed dances.

Ambassador Yu said that the Chinese Tibetan Losar is the most ceremonious traditional festival of Tibetan people.

"On behalf of the Chinese Embassy in Nepal, I would like to extend my sincere wishes and greetings to all the Tibetan compatriots living in Nepal, and pay tribute to all the friends for your care and support for the development of Tibet," she said.

Stating that China and Nepal are friendly neighbors linked by mountains and rivers, the ambassador was of the view that the bilateral cooperation between the two countries has deepened in politics, economy, trade and culture.

While talking about the rapid economic development in China's Tibet in 2016, the ambassador said that Tibet enjoyed economic development, social stability and ethnic solidarity, with the gross production in the Tibet Autonomous Region reaching 114.8 billion yuan, representing an increase of 11.5 percent over the previous year -- a double digit growth rate for the 24th year in a row.

Talking about the railway connectivity between Nepal and China, the ambassador noted that the first train that connects Guangdong province, Tibet, and Middle-South Asia has opened, starting from Guangzhou, via Lhasa, Kerung to Kathmandu, covering a total length of 6,070 km, becoming a highway-railway combined transport channel that links Guangdong, Tibet and Nepal.

"The success of the inaugural flight of Himalaya Airlines, co-funded by Tibet Airlines Co. Ltd. and Nepal, opened a new page for Tibet Airlines in its path of entering the international market," Yu said.

The ambassador said that it is everyone's common aspiration and responsibility to maintain the stability and unity of Tibet and to realize the prosperity and progress of Tibet.

"Our fellow Tibetan compatriots, despite living in a foreign land, always concerned about the progress and development of the motherland, and have made contribution to national unity and ethnic solidarity," she told the Tibetan community in Kathmandu.