It has been a month since four giant pandas in Xining, capital of Northwest China's Qinghai Province, met the public.

The pandas are the first to ever live in a zoo on the Qinghai-Tibet Plateau.

They were brought to the Qinghai-Tibet Plateau Wildlife Zoo's Xining Panda House from Southwest China's Sichuan Province in early June. On June 16, the zoo opened their living area to the public. Since then, more than 100,000 visitors have come to see them.

The Xining Panda House is a 9,000-square-meter luxury palace with several outdoor and indoor playgrounds that cost 70 million yuan ($10.2 million) to construct, according to a report from the local Xihai Metropolitan Daily.

The four pandas, one male and three females, are on loan from the Chengdu Research Base of Giant Panda Breeding in Sichuan Province.

Some people have expressed concern about whether the pandas can adapt to the high-plateau environment in Xining.

However, Xining is much drier than the pandas' usual habitats, therefore, the zoo has installed a humidifier in their living area.

Fresh bamboo is transported to Xining from Chengdu every other day by air. Every day the pandas also get to have apples and specially made cakes as snacks.

"The four have fully adapted to the climate in Xining and are active and healthy," Bai said.

To better serve the pandas, the Xining Panda House sent nine breeders to Chengdu for six months of training in 2018. The nine all have backgrounds in animal science or animal medicine.

An expert from the Chengdu base is also garrisoned at the panda house.

The four pandas are the adult 6-year-old male Hexing, the 7-year-old adult female Shuangxin and two sub-adult females Qiguo and Yuanman, who are both 3.

The latter two have been very popular among panda fans. 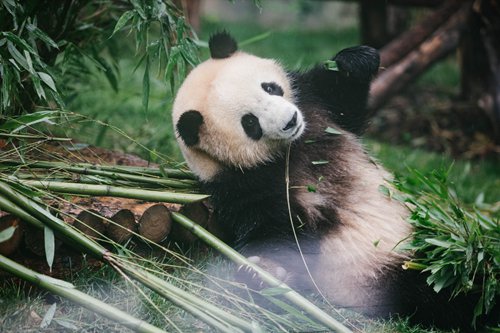 The hashtag for Qiguo on Sina Weibo has more than 5,600 followers and over 73 million views. Rather naughty for a panda, she has earned the nickname "destroyer" from fans since she often breaks the facilitates in the playground she shares with Yuanman.

Qiguo's twin sister Qiyi is actually quite famous. A video of Qiyi holding a breeder's leg went viral around the world in 2017, receiving billions of views.

Hexing is a foodie. He never stopped eating bamboo and the special cakes the breeders made for him during the Global Times' visit to the zoo.

Shuangxin, the eldest, is quite shy and so stayed hidden in her playground during the visit.

Bai told the Global Times that currently the zoo has no breeding plans for the pandas as that is strictly managed by the research base in Chengdu.

The four pandas have captured the attention of not only local residents, but also panda fans from around the world.

Bai said that many international fans have visited the panda house to meet the bears. "Days before, there was a fan from Japan who spent three days here just to take photos of the pandas."

To promote the pandas, the panda house has turned them into cartoon characters and designed souvenirs, such as plush toys, bags and T-shirts. The souvenirs have been hugely popular among visitors at the gift shop.

There is also a panda-themed restaurant in the house, where visitors can enjoy food while watching pandas through a big window. 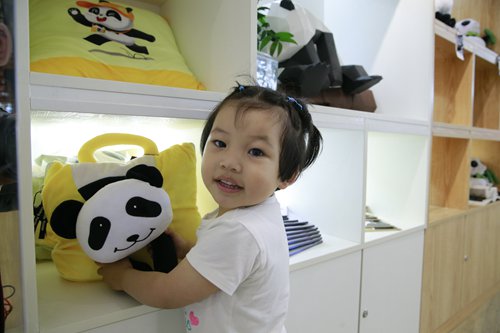 A young visitor holds a panda souvenir at the gift shop in the Xining Panda House. [Photo/GT]