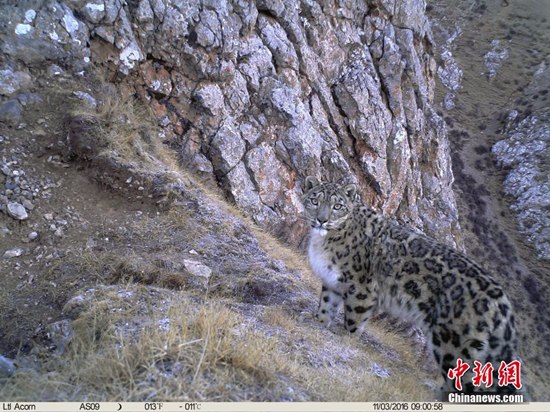 Image of a leopard. (Photo/Chinanews.com)

Images of at least two leopards, one of the world's most endangered species, have been caught on a camera installed at a nature reserve in northwest China's Qinghai Province, the provincial forestry department said Tuesday.

This is the second time that the species have been spotted in the province since 2015, when footage of a leopard and its cubs was captured in Zadoi County, Yushu Tibetan Autonomous Prefecture.

Researchers from the forestry bureau in the city of Yushu recently collected photos and video footage of leopards along the Tongtian River at an altitude of 3,500-3,600 meters in Sanjiangyuan Nature Reserve. They deduced that two or more leopards live in the region.

They also found sambar deer, white-eared pheasants and some other rare species, which could be the leopard's prey in the area.

The improved environment and increased forest coverage has resulted in better habitat for wild animals in Qinghai, according to the provincial forestry department.

The leopard has been under top national-level protection since 1983.