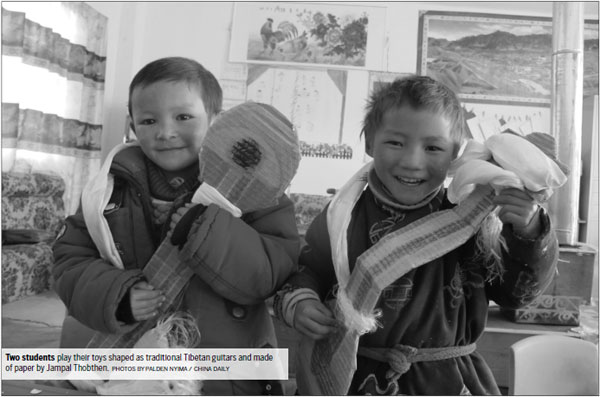 Being a kindergarten teacher can be a real challenge - especially if your job involves working at 5,000 meters above sea level, high on the Tibetan plateau.

The area is a haven for rare highland species, such as the Tibetan antelope, wild yak, argali, Tibetan wild ass, Mongolian gazelle, and black-necked crane.

But harsh living conditions, a lack of access to basic amenities and temperatures that rarely rise above freezing for more than 280 days a year make the county almost unbearable for its human residents.

Yet Jampal Thobthen, who graduated as a teacher from the Tibet Nationalities College last year, still chose to work in Aru Shangchung Kindergarten in the county's Kartso township.

The school, 150 km away from the county town, is surrounded by sweeping grassland.

It caters for 12 children ages 4 to 7, two of whom have speech impediments and another who has difficulty walking.

Jampal Thobthen encourages the latter, a 6-year-old boy called Konchok Tashi, to practice with a balance board that improves his gait. 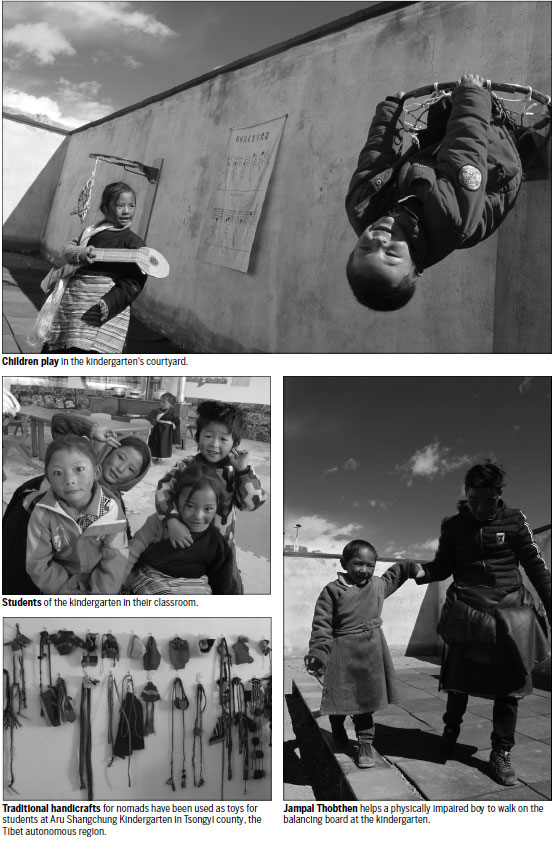 "It upset me to see him falling over all the time, so I learned on the internet how to help him with the balance board," the 24-year-old teacher said.

Since beginning the exercises, the boy's balance has advanced to the point that he now falls far less often and can sometimes even run.

Every day, Jampal Thobthen spends three hours in the morning and two hours in the afternoon, teaching the children under his care courses of study ranging from language, communication skills, arts, sports and games to cognition.

He not only plays the role of teacher, but also acts as the kindergarten's nurse and resident chef, preparing two nutritious meals for his students every day.

Many of the teaching materials he uses were made by him, as were some of the toys - from masks to musical instruments, including a toy shaped as traditional Tibetan guitar and made of paper.

"There are very few traditional Tibetan toys on the market, so I make most of them myself," he said. "The toys made in other places are produced and designed according to the needs of children in other places, Tibetan kids on the grassland needs to have toys which are closer to their way of life."

Jampal Thobthen is proud of his work at the kindergarten, even if it has been difficult at times.

Mobile phone signal is virtually nonexistent in the area, making it difficult to keep in contact with friends and family.

His former girlfriend left him soon after he started working in the remote school and he has little to occupy him in his spare time, except chatting with the locals.

"I have lost many conveniences and opportunities since moving here, but I feel proud that I can do something for these kids," he said.

"It's not easy to work here, but I am willing to work with them and I will keep working here."