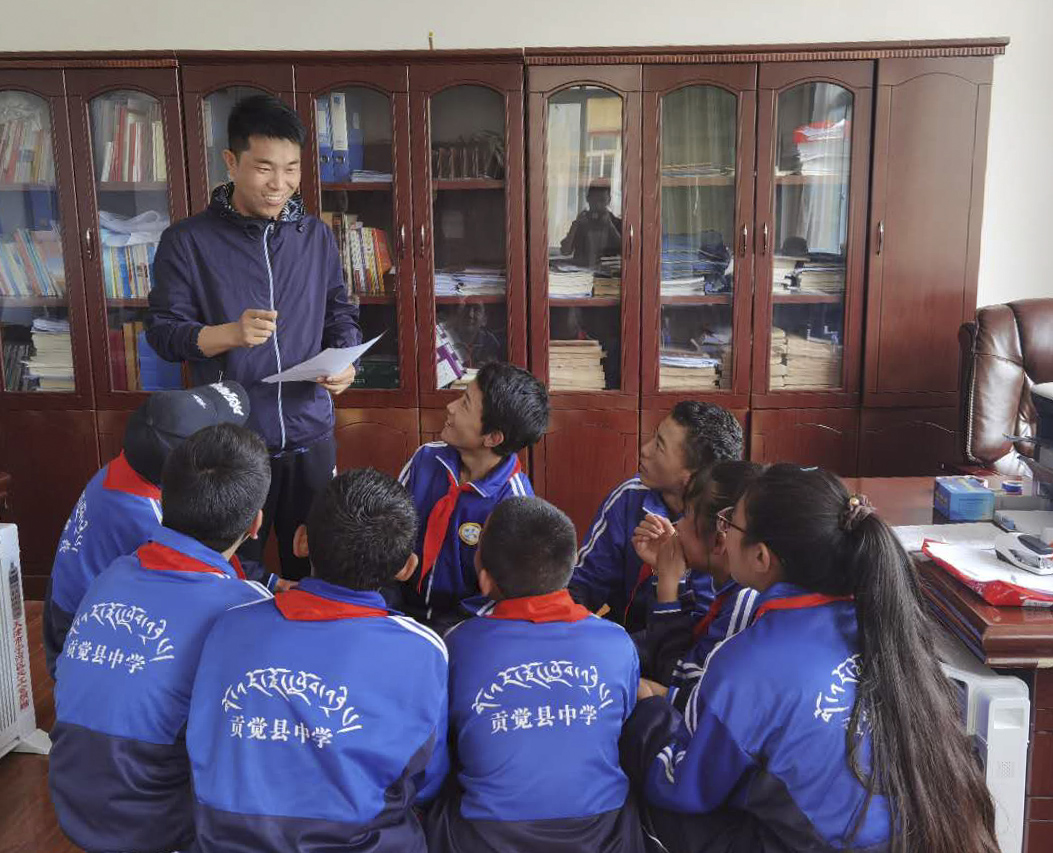 TIANJIN, Dec. 11 (Xinhua) -- It's been over a year since Chen Hongshun returned to his hometown in north China's Tianjin Municipality after volunteering as an English teacher in the Tibet Autonomous Region for two years, yet his bond with the students and teachers there remains.

"I'm so delighted that my students in Tibet can rely on education to bid farewell to poverty," Chen said. He now often exchanges ideas on teaching methods and the latest course materials with his former local colleagues.

Chen, in his 40s, said he regards Tibet as his second home. His experience with the plateau region of southwest China began with an education project in the city of Qamdo.

In May 2019, Chen volunteered to teach English at a school in Gonjo County, which was faced with deep poverty. His long journey to the county indicated that it would not be an easy job, taking him along narrow, winding mountain roads built into the cliff-sides.

"It took me three days to reach the school," Chen said.

After his arrival, he also struggled to get used to the harsh environment. Set at an altitude of over 4,000-meters, his new location sparked changes in his body, including high blood pressure.

"When I tried to talk, sometimes I felt the words would get stuck in my throat due to the lack of oxygen. I would often wake up in the night due to breathing difficulties, and when I awoke early in the morning, I would find dried blood in my nose," Chen said.

In spite of the difficulties, he stuck with the new job, encouraged by the bright-eyed students who were longing for knowledge.

Chen also studied the Tibetan language, with the aim of quickly forming a bond with the children.

To boost the students' interest in learning English, he introduced multimedia presentations to the remote village. He encouraged and trained his colleagues in the use of digital teaching tools, rather than relying so much on pen and paper.

However, many people in Gonjo County did not seem to take education seriously. Most people had earned their living from animal husbandry for generations, spending most of their lives in the mountainous areas.

Chen volunteered to join the team to persuade the parents to send their dropout students back to the classroom.

Chen said he and his colleagues paid several visits to the home of a young girl who had performed well academically but had quit school after her parents asked her to help with the farm work.

"Now the girl has been admitted to a high school and I believe her future will be very promising," said Chen.

He attached great importance to raising the awareness of parents regarding the benefits of education, and parent meetings soon became a regular fixture at the school.

"We told the parents about their children's performance and progress at school and updated them with the latest teaching methods, which has brought the parents closer with the teachers," Chen said.

In early 2020, due to the outbreak of COVID-19, Chen faced a long delay in returning to Tibet after a vacation, finally making the arduous journey in March.

However, he faced another obstacle when he was involved in a near-fatal car accident on a mountain road, less than 20 km from the school.

He had to suspend his plans for the new semester. The doctor advised him to return to Tianjin for a quicker recovery, but Chen chose to stay, motivated by his deep concern for his students and his teaching career in Tibet.

He was fully aware of the chronic shortage of English teachers in schools in the less-developed regions, and he was determined to make a difference, despite his health issues.

"In the first two weeks, I suffered from severe headaches so that I could hardly fall asleep," he said. "I lost 8 kg in weight in 10 days."

His determination to stay was further consolidated by the concern shown by his students, who made every effort to support his recovery.

"They provided me with hot water during breaks, asked me to sit down when giving lessons, and wrote me cards full of good wishes," Chen said.

After spending almost two years in Tibet, Chen said it was his honor to see the great progress his students had made in their studies.

"We grew up together," he said.

In February 2021, Chen was credited with a national award for his education-based poverty alleviation endeavors in Tibet.

"It is a lifelong honor for me to participate in their fight against poverty," Chen said, adding that the prize is not for him alone, but for all the teachers who have joined the poverty-relief campaign across the country.