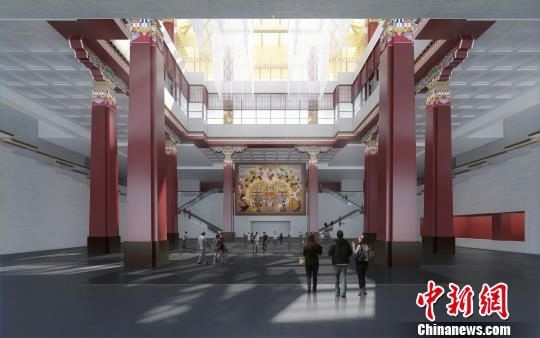 The Tibet Museum kicked off a renovation plan on Saturday to extend its current size on the original site in Lhasa, which is expected to complete in 2020.

The outlook of the museum will be designed in the asymmetric structure after the renovation, with its size expanded to 65,000 square meters, doubling its present size. The renovated museum will be able to accept up to 7,000 visitors per day upon reopen.

A relic preservation center will be built for Tibet art treasures protection and study, and there will also be areas for public education and entertainment.

According to Xinhua's report, the country has invested 660 million yuan (99 million US dollars) into the expansion project, and the architecture will follow the traditional Tibetan style but applying modern construction materials so that new energy such as the abundant solar energy there will be used.

The Tibet Museum has about 520,000 pieces of collections, including thangka, Tibetan Buddhist paintings on cotton or silk applique, Buddhist statues and jade and porcelain containers.

There are also many priceless collections, such as a pottery cup made 4,000 to 5,300 years ago, a century-old Buddhism sutra written on birch bark, which is the only one of its kind in the world, as well as edicts on gold foil issued by the emperors of the Qing Dynasty (1644-1912).

The museum has already shut down since December 2016, but during the years of renovation, its collections will continue to be exhibited through tour exhibitions in other museums out of Tibet.