Most people who visit a teahouse do so for refreshment or to socialize, but the inhabitants of Amdo county in the Tibet autonomous region have a different reason to go - they listen to the Epic of King Gesar be retold.

Believed to date to the 12th century, the Epic of King Gesar relates the heroic deeds of legendary Tibetan warrior king, Gesar of Ling.

It is considered to be the world's last living epic, handed down from generation to generation through a primarily oral tradition, and many storytellers who perform it see it as their mission to share the legend in their day-to-day lives.

Amdo county, which is located at an average attitude of more than 4,700 meters and is mostly populated by nomads, has three King Gesar storytelling teahouses in its small county seat, according to the local culture bureau.

Each teahouse hosts two to three storytellers, all of whom derive their entire income from retelling the epic.

Oma Tsering, who is blind, is one such storyteller.

He began telling the Epic of King Gesar at age 11, when he would blurt out the stories almost without thinking while playing with toy knives and swords.

Before moving to Amdo county, he worked in a teahouse in Nagqu prefecture for five years and was paid by the owner to tell the stories every day, to an audience mostly comprised of the elderly and nomads.

Samdrup Dorjee is another storyteller and has been working in a teahouse in Amdo county for almost a year.

"I am pleased to hear that preserving the Epic of King Gesar has drawn attention both in China and overseas, because telling these stories is part of my life," he said.

Born in a remote village on the grassland of Amdo county's Tsomar township, Samdrup Dorjee's interest in King Gesar started at age 13, with a dream.

He dreamed of two fairies, wearing white dresses with pearls around their necks, emerging from the clouds to hand him a stack of scripture. He was told to learn the words, which were written in red ink on white paper, by heart.

The next day, while herding yaks, Samdrup Dorjee said he began to speak to himself the story of King Gesar.

That evening, he shared these tales with two other children who were sharing his tent and the performance lasted for hours.

Ever since, he has been his village's King Gesar storyteller, recounting the tales during important events such as Tibetan New Year, or Losar, and the annual Horse Racing Festival.

In fact, telling stories has become such an important part of his life that Samdrup Dorjee is convinced his good health depends upon it.

When he became sick soon after having his pivotal dream at age 13, the storyteller said he only recovered by sharing tales of King Gesar with his fellow villagers.

At age 25, he was sent to the hospital several times, suffering from a mystery illness that could not be cured.

He was later advised by a local lama to continue telling the King Gesar stories, which he insists helped with his recuperation.

"In the past, I did not have a storytelling certificate and I was told not to tell the stories, so I stopped, but became gravely ill," said the 46-year-old.

"Now I know that I was born to tell these stories, and I don't care who the audience is - no matter if it's a leader, a rich man, or the poor."

Every day, Samdrup Dorjee spends three hours recounting the Epic of King Gesar in the teahouse, alternating between the morning and afternoon shift.

His audience sit and listen while sipping sweet tea, traditional Tibetan butter tea or hot water, as no food is served at the venue.

"I used to remember the stories by looking at my hands and sometimes counting on my fingers when I was young, but now I have lost that ability," he said.

"It cannot be learned in school, so I want to continue telling it for as long as I can." 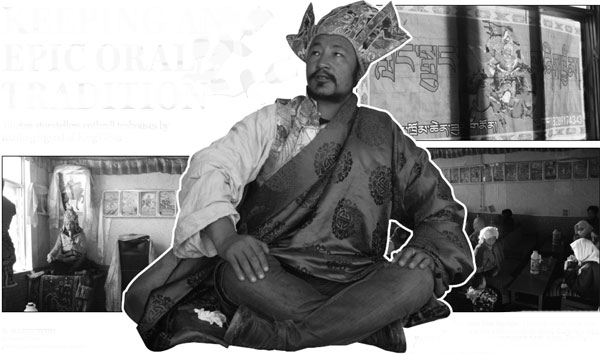