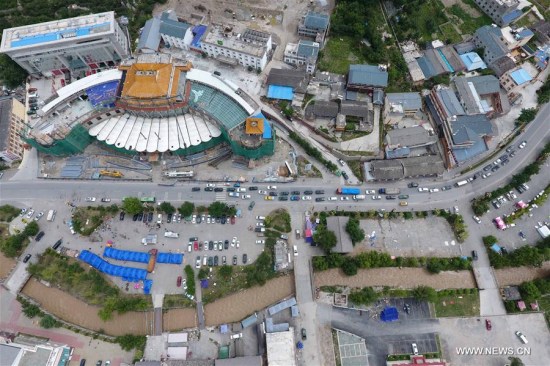 Phata, 62, gently twists a bulb onto a newly installed lamp holder, and the light illuminates the entire tent.

Power and water supply have been restored at Zhangzha Village after a 7.0-magnitude quake struck Jiuzhaigou County in southwest China's Sichuan Province on Tuesday.

Zhangzha Village is 4 km from the entrance of Jiuzhaigou tourist resort. Most of its 746 villagers, including Phata, live on tourism.

Phata, who is of Tibetan ethnicity, had earned a fairly high income by renting five rooms of his tile house and running a hostel with his two sons, until the earthquake hit the area on Tuesday, leaving 24 dead and hundreds injured.

"The walls were all cracked and the tourists huddled in the yard crying as rocks kept tumbling down the mountain," he recalled. "Luckily, my family members were all safe."

As constant aftershocks struck the area, Phata and his fellow villagers stayed up on the first night comforting the tourists.

More than 60,000 tourists had been evacuated by the next evening, the same day tents were delivered to the village.

"Now that we have shelter, we need to think about how we can move on," he said.

After the quake, a non-local Han couple, who had rented Phata's house to run a restaurant, evacuated the village.

"Before they left, they told me to distribute the meat, vegetables and eggs in their restaurant to the villagers," he said. "The Han and Tibetan people have long lived together in the village, and we are just like a family."

Villagers stood in line to relay food, mattresses, quilts and tires out of houses that could have collapsed at any minute. They put mattresses on tires to avoid them being soaked by rainwater.

While most of the villagers fell asleep in tents, Phata sat up looking at the mountain, for fear of further collapse. His cousin, Taktrugta, was not that worried.

Taktrugta, 63, volunteered to join young people who were patrolling at night.

With a flashlight, he saw pieces of wall and glass and other debris scattered on the ground. He paused and said, "Tourists used to be everywhere in the village."

The village had just built a street featuring Tibetan culture, and the shops along the street were scheduled to open to tourists soon. The earthquake turned the new street into a mess.

"This street was supposed to be a 2.0 version of our village," said Taktrugta. "But I believe, with the help of the government and the public, we will strive to build a better 3.0 version."